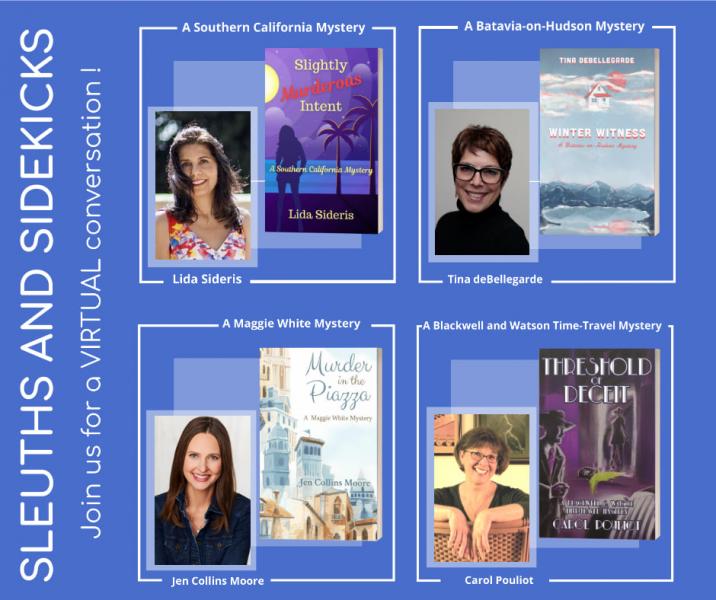 Please join us for an intriguing  virtual evening of SLEUTHS AND SIDEKICKS with mystery writers Jen Collins Moore, Carol Pouilot, Tina deBellegarde and Santa Barbara's own Lida Sideris on Thursday, January 14 at 5 pm!

There's a shooter on the loose who keeps missing his target. But that doesn't stop him from trying again...and again. It's up to rookie lawyer and spunky sleuth, Corrie Locke, to find the gunman before he hits his mark. Corrie enlists a team with various strengths, weapons and cooking skills to help her find the shooter: her computer whiz boyfriend, a former security guard, an over-the-hill informant and a couple of feuding celebrity chefs. Can Team Corrie hunt down the shooter before he scores a bulls-eye?

Lida Sideris is the author of the Southern California Mystery series. Her first stint after law school was a newbie lawyer's dream: working as an entertainment attorney for a movie studio...kind of like her heroine, Corrie Locke, except without the homicides. Lida was one of two national winners of the Helen McCloy Mystery Writers of America Scholarship Award for her first book. She lives in Santa Barbara with her family, rescue dogs and a flock of uppity chickens.

Maggie White is newly arrived in Rome on her husband’s expat assignment. She’s spent the last twenty years juggling career and family, but now her kids are in college and she’s been downsized from the high-powered job that gave her an identity. She thinks offering painting instruction to well-heeled travelers on a luxury tour will unlock the secret to living the dolce vita, then she discovers her boss shot dead in his penthouse. And when the police discover the dead man was blackmailing Maggie, she finds herself the prime suspect.

Jen Collins Moore transports readers to Rome in her new series, the Maggie White Mysteries.  The perfect blend of funny and smart, her debut novel, Murder in the Piazza, is filled with the art, history and food of Europe’s greatest city. She's the founder of Meez Meals, Chicagoland’s most popular meal kit service, and she lives in Chicago with her husband and two sons.

Russo is murdered in broad daylight. It seems no one saw anything, but things are not always what they seem in this small New York town. Tackling the investigation, Detective Steven Blackwell discovers Frankie’s little black book, a coded list of dozens of flings, affairs, and one-night stands−and a solid motive for the widow. Soon, what appeared to be a straight-forward case gets complicated. A witness goes missing, a second body turns up, the victim’s cousin disappears, and an old flame surfaces. Faced with conflicting pieces of evidence, lies, and false alibis, Steven creates a psychological portrait of the killer. He realizes he’s looking for someone wearing a mask. But the killer is not the only one in disguise. Every moment’s a masquerade in Threshold of Deceit, the exciting second installment in The Blackwell and Watson Time-Travel Mystery series.

Carol Pouliot (poo-lee-o) is the author of the Blackwell and Watson Time-Travel Mystery series, now on her 3rd book. Carol is a retired language teacher who volunteered with USAID and also owned a translating agency that provided translations in over 24 languages. Carol lives in Central New York where the snow reaches over 12 feet every year.

When a beloved nun is murdered in a sleepy Catskill Mountain town, a grieving young widow finds herself at the center of the turmoil. Bianca St. Denis is searching for a job and seeking acceptance in her new home of Batavia-on-Hudson. Agatha Miller, the nun’s closest friend and the ailing local historian everyone loves to hate, shares her painful personal history and long-buried village secrets with Bianca. Armed with this knowledge, Bianca unravels the mysteries surrounding the death while dealing with the suspicions of her eccentric neighbors.

Tina deBellgarde (de-bell-gard) is the author of Winter Witness, nominated for both the Retreat West and the Blue Pencil Agency’s First Novel Award. Tina lives in Catskill, New York with her husband Denis and their cat Shelby. When she isn’t writing, Tina is helping Denis tend their beehives, harvest shiitake mushrooms, and cultivate their vegetable garden.