Please join us for an evening with acclaimed author and longtime Tokyo resident Robert Whiting talks about his latest book, TOKYO JUNKIE: 60 YEARS OF BRIGHT LIGHTS AND BACK ALLEYS...AND BASEBALL on April 27 at 7pm. 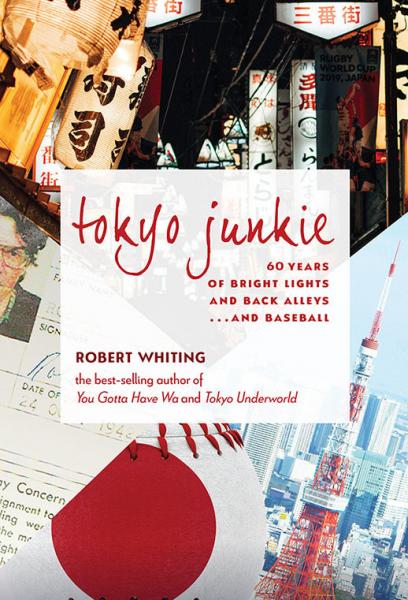 Tokyo Junkie is a memoir that plays out over the dramatic 60-year growth of the megacity Tokyo, once a dark, fetid backwater and now the most populous, sophisticated, and safe urban capital in the world.

Follow author Robert Whiting (The Chrysanthemum and the Bat, You Gotta Have Wa, Tokyo Underworld) as he watches Tokyo transform during the 1964 Olympics, rubs shoulders with the Yakuza and comes face to face with the city’s dark underbelly, interviews Japan’s baseball elite after publishing his first best-selling book on the subject, and learns how politics and sports collide to produce a cultural landscape unlike any other, even as a new Olympics is postponed and the COVID virus ravages the nation.

A colorful social history of what Anthony Bourdain dubbed, “the greatest city in the world,” Tokyo Junkie is a revealing account by an accomplished journalist who witnessed it all firsthand and, in the process, had his own dramatic personal transformation.

Robert Whiting is a journalist and author who has lived in Tokyo on and off for more than half a century.

One of only a few Western writers to have a regular newspaper column in Japanese, he is the author of several highly successful books on Japan including the best-selling You Gotta Have Wa (on baseball in Japan) and Tokyo Underworld (currently under option to Legendary Global). Topics he has written on include sports, Tokyo nightlife, and crime.

"A delightful memoir of the author’s five-decade love affair with a city that “hypnotized” him and never let go."

"With a patter that lands like readers have pulled up a barstool to hear a traveler’s yarns... Whiting’s love for his adopted city remains constant and contagious in this collage-style survey."

"Whiting's memoir is packed with insights and extremely funny in places. Historians of the postwar period will learn much about the nexus of politics, money, media and organized crime that helped fuel Japan's phoenix-like rise from the ashes of defeat. [Robert Whiting] is probably the only person on the planet capable of telling us what it was like to be there at that particular moment in time."

"A complex, captivating portrait of a city that is both insular and welcoming, and is now one of the world’s top tourist destinations."

"These are more than picture postcards of history, or lines in a textbook. Japan changes, evolves, as it must - but the Japan of this book, and Whiting's journey through it, forms part of an account of moments in time that deserve to be remembered. Nation and individual, entangled together - a tale of a life, truly 'lived'."

"Tokyo Junkie is a likeable, breezy, well-written memoir, packed intensely with detail and eye-opening information about Japan, about the foibles of its author, and about bitter WWII enemies becoming steadfast friends in the following decades."

“From the author of Tokyo Underworld comes an up close and very personal memoir. Tokyo Junkie is a raucous, funny, and always fascinating love letter to one of the most dynamic cities in the world. A pleasure to read from start to finish.”

“Whiting has lived a vivid, Zelig-like life that tracks the meteoric rise of Tokyo into one of the world's greatest cities. His memoir is a wonderful tapestry of friendships, interviews and chance encounters with corporate barons, barmaids, ball players and the occasional mob boss. Through it all, Whiting's unassuming demeanor, natural curiosity and droll sense of humor leave the reader wondering who else he's met.”

—Ken Belson, reporter with The New York Times formerly based in Tokyo

"Tokyo Junkie is a deep dive into the megapolis and a communion with its crazy, eccentric denizens from a man who knows it better than anyone else. Bob Whiting came to the city as a stranger in a strange land in 1962 and stayed for five decades—he knows the dark alleys, the good whisky bars, the crooked politicians and the crooks, the baseball players, the bookies, the Olympics that were and the Olympics that will be better than anyone alive. You will not find a more entertaining memoir and guidebook to the darker side of the rising sun, and to a life well-lived, than Tokyo Junkie. It’s as addictive as life in the city (citadel) itself."

—Jake Adelstein, investigative journalist and author of Tokyo Vice: An American Reporter on The Police Beat in Japan

"A glorious love letter to the world's greatest city. Alternately bawdy, funny, elegiac – and even violent – Tokyo Junkie will take its place next to classics by Lafcadio Hearn, Edward Seidensticker, Donald Richie, and Ian Buruma that succeed in articulating the hold that Japan has on the hearts of so many of us gaijin."

—R. Taggart Murphy, author of Japan and the Shackles of the Past and The Weight of the Yen

“Robert Whiting is a marvel. His rich experience, his nose for great stories, his wit and good sense make Tokyo, past and present, sparkle with life.”

—Ian Buruma, author of A Tokyo Romance, The Invention of Japan, and many others

"This is a delightful book, a wry, vivid, and illuminating account of a country, a culture, and a keenly observant character through five dramatic decades."

“Whiting's ability to craft history lessons as narrative epics that captivate an audience and paint a stunning portrait of what Tokyo’s culture and history mean to the world at large is unparalleled.”

“Robert Whiting is a global treasure whose bestselling books explicated Japan through ballplayers, gangsters and entertainers. In Tokyo Junkie, he tells the riveting story of his personal fascination with the city and its inhabitants. Every visitor to Japan, every student of Japanese culture, and every diplomat posted there should have a copy. It's an essential guide to understanding the country and its people.”

—Derek Shearer, former US ambassador and professor of diplomacy

"Few writers could deliver firsthand insights into six decades of wild, wonderful, bizarre and sinister aspects of Japanese culture—let alone with Robert Whiting’s level of style and knowledge. From professional baseball to politics and the underworld, Whiting takes the reader on his life journey through a remarkable world."

"Whiting is the consummate raconteur, regaling readers with tales of bawdy exploits, how to befriend yakuza and the art of hard living in a book brimming with wry humor and empathy. In taking us back to the scruffy and wild Tokyo of yesteryear he offers astute asides on the evolving gamut of pathologies that have shaped Japan. Through sports and organized crime Whiting shares his genius for peeling back the layers of the city that made him."

"Seduced by its bustle and underworld hustle, Bob Whiting has spent decades exploring the hidden corners of Tokyo and the Japanese psyche. From yakuza to baseball and dirty politics to gleaming skyscrapers—he takes you on the intercultural journey of a lifetime."

"Tokyo Junkie reads like a Japanese comic. A vivid, fast-paced paean to a great city, and Robert Whiting’s emotional journey to reconciling his insider/outsider status. Wonderful!"

—Nicholas Pileggi, author of Wiseguy and Casino and screenwriter of Goodfellas and Casino

"A guided tour along the sidestreets and into the backrooms of Tokyo, led by a master of the sly anecdote with the oddball character only he can find.  In this memoir that spans six decades, Whiting mixes dashes of history with the personal episodes that tell the story of his love for a great city and a great people."

—Lawrence Repeta, Plaintiff in the suit that opened Japan's courts to spectator reporting

Tokyo Junkie: 60 Years of Bright Lights and Back Alleys . . . and Baseball (Paperback)