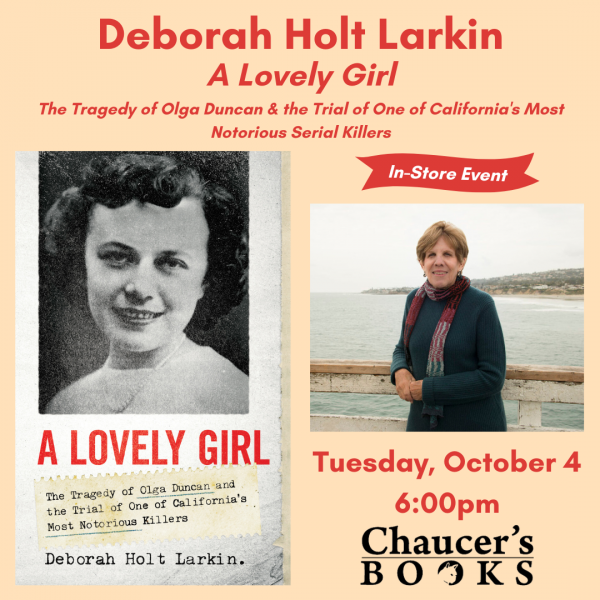 Chaucer's will host author Deborah Holt Larkin to talk about and sign her book A LOVELY GIRL:THE TRAGEDY OF OLGA DUNCAN AND THE TRIAL OF ONE OF CALIFORNIA'S MOST NOTORIOUS KILLERS on Tuesday, October 4 at 6 p.m. 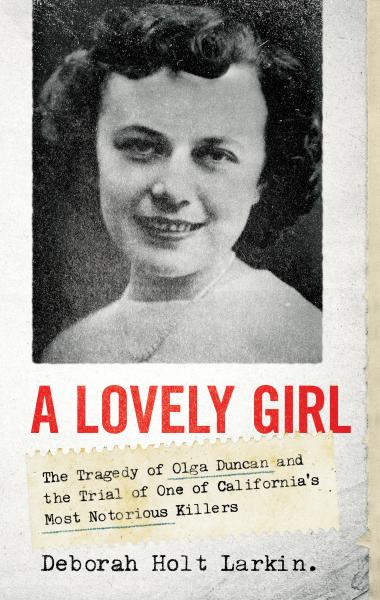 The incredible story of a 1958 murder that ended with the last woman to ever be executed in California—a murder so twisted it seems ripped from a Greek tragedy.

Deborah Larkin was only ten years old when the quiet calm of her California suburb was shattered.  Thirty miles north, on a quiet November night in Santa Barbara, a pregnant nurse named Olga Duncan disappeared from her apartment.  The mystery deepens when it is discovered that Olga’s mother in-law—a deeply manipulative and deceptive woman—had been doing everything in her power to separate Olga and her son, Frank, prior to Olga’s disappearance.

From a forged annulment to multiple attempts to hire people to “get rid” of Olga, to a faked extortion case, Elizabeth seemed psychopathically attached to her son. Yet she denied having anything to do with Olga’s disappearance with a smile.

But when Olga’s brutally beaten body is found in a shallow grave, apparently buried alive, a young DA makes it his mission to see that Elizabeth Duncan is brought to justice.  Adding a wrinkle to his efforts is the fact that Frank—himself a defense attorney—maintained his mother’s innocence to the end.

How does a young girl process such a crime along with the fear and disbelief that rocked an entire community?  Decades later, Larkin is determined to revisit the case and bring the story of Olga herself to light.  Long overshadowed by the sensationalism and scandal of Elizabeth and Frank, A Lovely Girl seeks to reveal Olga as a woman in full.  Someone who was more than the twisted family that would ultimately ensnare her.

As we follow the heart-pounding drama of the case through Larkin's young eyes—her father was the court reporter—A Lovely Girl is by turns page-turning yet poignant, and makes the reader reexamine how we handle fear, how we regard mental illness, and how we understand family as we carve our own path in a dangerous world. 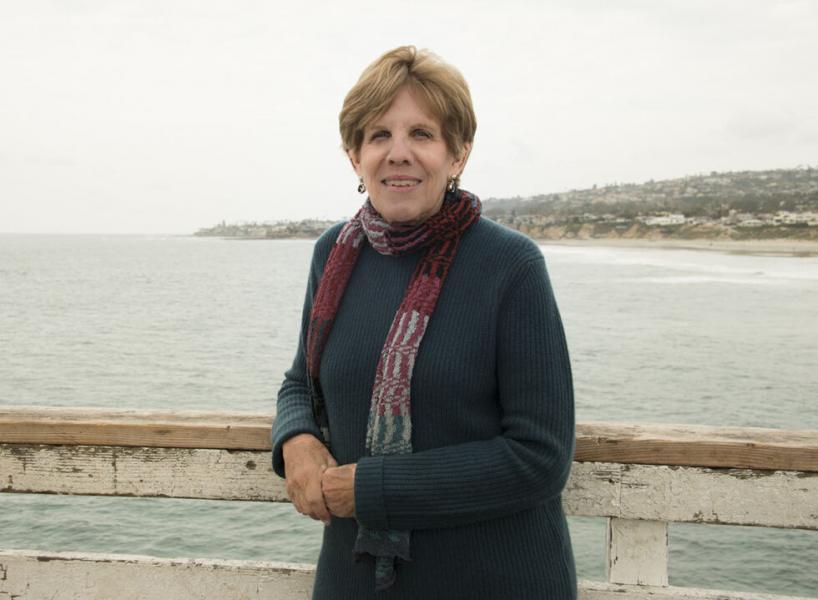 Deborah Larkin holds a bachelor’s degree in American History and Literature from the University of California at Davis, and she studied creative writing at the University of California at San Diego. She has a master’s degree in the Education of Exceptional Children from San Francisco State University. She has spent more than three decades teaching students with special needs before becoming an elementary school principal.
Event date:
Tuesday, October 4, 2022 - 6:00pm to 7:00pm
Event address:
3321 State Street
Santa Barbara, CA 93105

A Lovely Girl: The Tragedy of Olga Duncan and the Trial of One of California's Most Notorious Killers (Hardcover)