This event has ended.

To view the recording of this event, click here: https://www.youtube.com/watch?v=th5bK1sP8yI 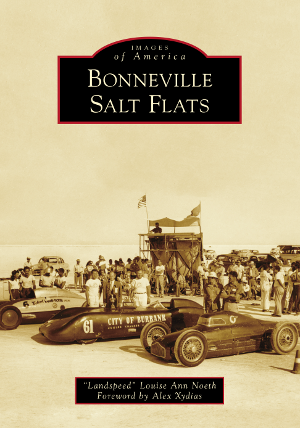 BONNEVILLE SALT FLATS (synopsis from Arcadia Publishing) – Astronaut John Glenn used Utah’s Bonneville Salt Flats as a landmark from space, but on Earth, amateur motorsports devotees have used the blistering hot, flat land as a speed laboratory for more than a century. On August 22, 1949, the hot rodders joined the pageant of power with their handcrafted cars, trucks, and motorcycles for a one-time event but never stopped coming back, trying to go faster every run down the multi-mile course. All came looking for the answer to the same question: “How fast will it go?” Those efforts have made them the fastest people on the planet, reaching speeds in excess of 500 miles per hour. On the salt, people find the limits of their courage, learn what daring greatly is all about, and realize why a Bonneville Salt Flats speed record is an internationally respected pedigree. People who race on the salt flats become a family bound together by speed—a powerful force that erases ethnic, economic, political, and religious barriers. They are land speed racers. And this is their story.

“Landspeed” Louise Ann Noeth is a lady raconteur of stunning speed stories. She raced jet dragsters, helped TEAMVesco capture the current 458-mile-per-hour world wheel-driven record, and guided the Breedlove and Fossett teams. Touchstones throughout motorsports are her heralded historical tome Bonneville Salt Flats and her Fuel For Thought column. She is an extreme speed consultant for film and television. Alex Xydias, an innovator who, with his partner Dean Batchelor, set the hot rod world afire in 1949 obliterating speed records, sets the stage for Noeth’s pictorial romp through salty speed deeds.