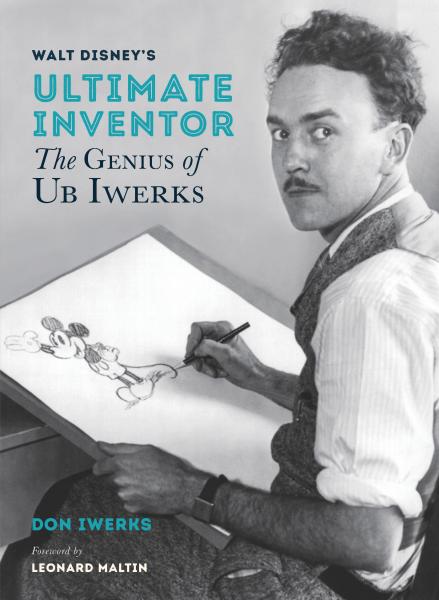 Gorgeous never-before-published photographs and fascinating personal memories celebrate the half-a-century career of Disney Legend Ub Iwerks, a self-taught animator who became the first to animate Mickey and Minnie Mouse and an exceptional draftsman, prolific innovator, and all-around technical genius who directly collaborated with Walt Disney to create some of the most loved moments throughout film and theme parks.

Even before the creation of Mickey, Walt established a reputation as a technical leader in Hollywood and frequently relied on the counsel, expertise, ingenuity, and creativity of a kindred spirit, lifelong friend, and fellow virtuoso: Ub Iwerks. Up till now, Ub and his many technical inventions and techniques have been largely unknown by the general public. His illustrious career consisted of dozens of innovative contributions, large and small, to both animated and live-action motion pictures, as well as the fields of optics, film processes, and special effects. He was also the major force behind the design of special cameras, projectors, electronics, and audio for theme park projects, and much more. This extraordinary book is a tribute from a grateful son to his remarkable father.

Don Iwerks followed his father, Disney Legend Ub Iwerks, to The Walt Disney Studios in 1950. There, among many leadership roles and accomplishments, Don developed cameras, projectors, and other technical systems, many of which are still used in Disney parks around the world, among them Circle Vision 360, wide gauge 3D film systems, and the projection system for the wildly popular Star Tours attraction. In 1986, after thirty five years at Disney, Don joined fellow Disney executive Stan Kinsey to cofound their own company, Iwerks Entertainment, a maker of giant screen theaters, simulation theaters, and 3D projection based theme park attractions. In 1997, Don received the Gordon E. Sawyer Award, an Oscar from the Academy of Motion Picture Arts and Sciences Board of Governors. In 2009, Don Iwerks joined his father in the pantheon of Disney icons when he was presented with the prestigious Disney Legends Award.