We are pleased to announce that 2020  National Book Award Winner Charles Yu (INTERIOR CHINATOWN) will join us for a virtual discussion on Wednesday, December 2 at 6 pm.  This special discussion will be moderated by author (MEMBERS ONLY) and UCSB Asian American Studies professor Sameer Pandya. 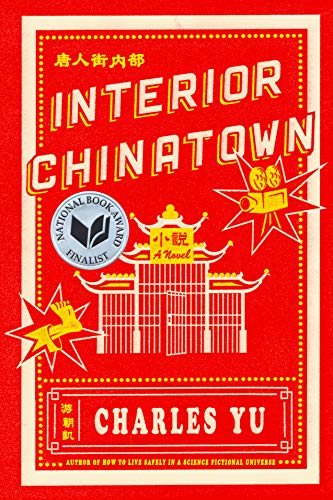 INTERIOR CHINATOWN - From the infinitely inventive author of How to Live Safely in a Science Fictional Universe comes a deeply personal novel about race, pop culture, immigration, assimilation, and escaping the roles we are forced to play.

Willis Wu doesn’t perceive himself as a protagonist even in his own life: he’s merely Generic Asian Man. Every day, he leaves his tiny room in a Chinatown SRO and enters the Golden Palace restaurant, where Black and White, a procedural cop show, is in perpetual production. He’s a bit player here too. . . but he dreams of being Kung Fu Guy–the highest aspiration he can imagine for a Chinatown denizen. Or is it?

After stumbling into the spotlight, Willis finds himself launched into a wider world than he’s ever known, discovering not only the secret history of Chinatown, but the buried legacy of his own family, and what that means for him, in today’s America.

Playful but heartfelt, a send-up of Hollywood tropes and Asian stereotypes–Interior Chinatown is Charles Yu’s most moving, daring, and masterful novel yet.

CHARLES YU is the author of four books, including his latest, Interior Chinatown, which is a Finalist for the National Book Award for Fiction and the Le Prix Médicis étranger, and longlisted for the Andrew Carnegie Medal for Excellence in Fiction. He has received the National Book Foundation’s 5 Under 35 Award, been nominated for two Writers Guild of America awards for his work on the HBO series Westworld, and has also written for shows on FX, AMC, Facebook Watch, and Adult Swim. His fiction and non-fiction have appeared in a number of publications including The New Yorker, The New York Times Magazine, The Atlantic, Wired, Time and Ploughshares. You can find him on Twitter @charles_yu.