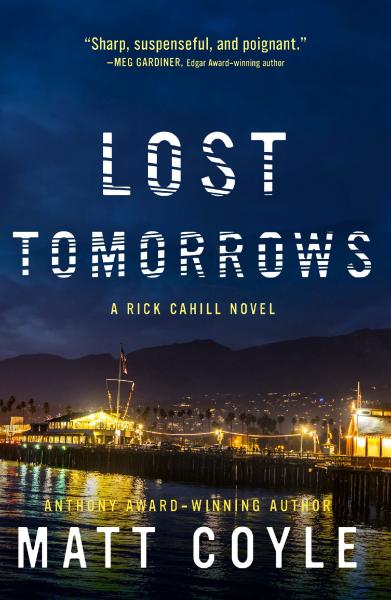 Chaucer's Book is excited to welcome UCSB graduate, Matt Coyle, back to Santa Barbara, with his sixth novel  in his crime series about private detective Rick Cahill. And this particular murder-to-be-solved takes place in Santa Barbara, as you can see from the beautiful book cover shot of Stearn's Wharf at night.

And here's the low-down: A phone call thrusts Rick Cahill’s past and all its tragic consequences into his present. Krista Landingham, his former partner on the Santa Barbara Police Department, is dead. When Rick goes to the funeral in the city where his wife was murdered and where he is seen as guilty for her death in the eyes of the police, he discovers that Krista’s death may not have been a tragic accident, but murder. Hired by Krista’s sister, Leah, to investigate, Rick follows clues that lead him to the truth, not only about Krista’s death, but about the tragedy that ruined his life.

Matt Coyle is the author of the best-selling Rick Cahill crime novels. At the tender age of fourteen, his father gave him the Simple Art of Murder by Raymond Chandler. Matt fell in feet first, and knew then he would one day become a crime writer. He graduated with a degree in English from University of California at Santa Barbara. Writing at night for over a decade his debut novel, Yesterday’s Echo, was finally published in 2013. Though the long journey to publication was arduous, his first book garnered the Anthony Award for Best First Novel, the San Diego Book Award for Best Mystery, the Ben Franklin Award for Best New Voice in Fiction.