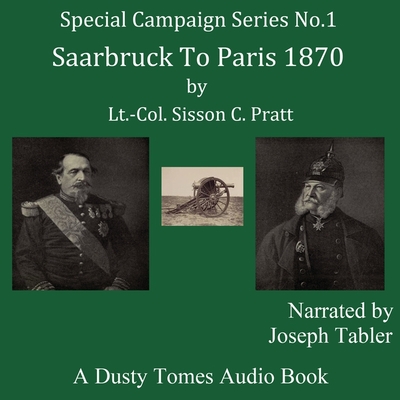 By Lt Col Sisson C. Pratt, Joseph Tabler (Read by)
$21.95
This title is likely Out of Print or otherwise unavailable

Publisher's Preface to the Series: The Special Campaign Series deals with the history of the war in its technical aspect, and the text of each volume is interspersed with strategical and tactical comments. A description of the Russo-Turkish war of 1877 is in the course of preparation, and subsequent volumes will deal with those campaigns of the nineteenth century that present features of exceptional military interest. It is hoped that this series will not only be useful for examination purposes but may form the nucleus of an interesting library for the military student.

From the Author's Preface: Strategy is a term of wide significance. It is applied to the plans, combinations, and movements in war whereby the probability of success is increased, the effect of victory enhanced and the results of defeat minimized. It embraces the art of the general in conducting operations in the theatre of war and the methods by which he seeks to bring the enemy to battle. In warfare between the armed nations of Europe but the little scope is afforded for the brilliant combinations that marked the era of Napoleon. The existence of telegraphic communication eliminates to a great extent the chance of surprise, while the movements of great bodies of troops are restricted by their dependence on railway systems...

In addition to its strategic lessons, the campaign of 1870 marks a distinct era in tactical progress: and the experiences of the war founded the theory of modern combat.

Dusty Tomes Audio Books are public domain books retrieved from the ravages of time. Available for the first time in this format for your pleasure and consideration.