How Press Propaganda Paved the Way to Brexit (Paperback) 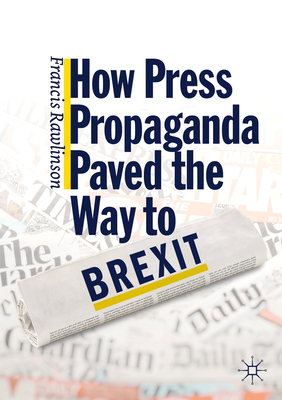 PART I: BACKGROUND1. Introduction
2. The history of the UK's relations with the EU: from reliable if sometimes awkward partner to estranged outsider 2.1 Love match or marriage of convenience?2.2 The first 20 years2.3 The battle of Maastricht, normalization under Labour, the explosive rise of Euroscepticism 2.4 Referendums versus representative democracy2.5 The run-up to the referendum2.6 The referendum campaign2.7 Aftermath
3. National identity, the British media and press propaganda3.1 British identity and attitudes - a complex amalgam of history, geography and much else, with nostalgia and nationalism thrown into the mix 3.2 The British media landscape3.3 The Eurosceptic British press - socio-political background3.4 Is the British press really more Eurosceptic than that of Continental countries?3.5 Propaganda3.6 Introduction to Part II
PART II: BUSTING MYTHS4. "Taking back control of our laws" I. Democracy4.1 Introduction: Democracy and sovereignty4.2 Democracy: The EU legislative process - is it democratic? 4.3 The European (EU) Commission4.4 The Council of Ministers: The inconvenient legislator4.5 The European Parliament4.4 The "democratic deficit"
5. "Taking back control of our laws" II. Sovereignty5.1 The scope, volume and quality of EU legislation, now and in the future5.2 How far will EU integration go? Is it moving inexorably to a European" super-state"?5.3 Sovereignty5.4 Red tape5.5 Is the EU fit for purpose?5.6 The European Court of Justice
6. "Taking back control of our money" The cost of EU membership6.1 The EU budget6.2 The UK budget contribution: 350 million a week - an exercise in populist economics6.3 Audit and financial management6.4 Fraud, corruption6.5 The cost of Brexit for public finances - Taking back control?
7. "Taking back control of our borders" Is the EU to blame for immigration?7.1 State of immigration in the UK7.2 Climate of opinion towards immigration - tolerant coexistence strained by some real grievances, but also by engineered anger and fear7.3 The 2015-16 European migrant crisis7.4 Coverage of immigration and the 2015-16 European migrant crisis in the British press and its effect on the EU referendum7. 5 Outlook - immigration policy after Brexit
PART III: CONCLUSION8. Conclusion.

Francis Rawlinson is a former EU Commission official. He is also Fellow of Kwansei Gakuin University, where he was a professor for EU studies from 2011 to 2017. He has written on EU competition law, state aid control, the euro and regional development.