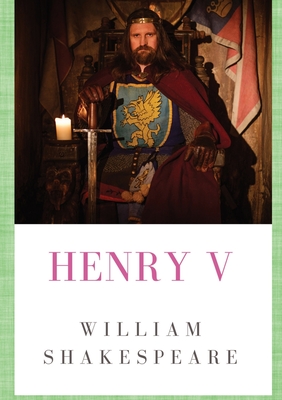 Henry V is a history play by William Shakespeare, believed to have been written near 1599. It tells the story of King Henry V of England, focusing on events immediately before and after the Battle of Agincourt (1415) during the Hundred Years' War. In the First Quarto text, it was titled The Cronicle History of Henry the fift, p.6 which became The Life of Henry the Fifth in the First Folio text.The play is the final part of a tetralogy, preceded by Richard II, Henry IV, Part 1, and Henry IV, Part 2. The original audiences would thus have already been familiar with the title character, who was depicted in the Henry IV plays as a wild, undisciplined young man. In Henry V, the young prince has matured. He embarks on an expedition to France and, his army badly outnumbered, defeats the French at Agincourt.The Elizabethan stage lacked scenery. It begins with a Prologue, in which the Chorus (a lone speaker addressing the audience) apologizes for the limitations of the theatre, wishing there were "a Muse of fire", with real princes and a kingdom for a stage, to do justice to King Henry's story. Then, says the Chorus, King Henry would " a]ssume the port bearing] of Mars". The Chorus encourages the audience to use their "imaginary forces" to overcome the limitations of the stage: "Piece out our imperfections with your thoughts ... turning the accomplishment of many years / Into an hour-glass".Shakespeare's plays are in five acts. In Henry V, the first two deal largely with the king and his decision to invade France, persuaded that through ancestry, he is the rightful heir to the French throne. The French Dauphin, son of King Charles VI, answers Henry's claims with a condescending and insulting gift of tennis balls, "as matching to his youth and vanity."The Chorus reappears at the beginning of each act to advance the story. At the beginning of Act II, he describes the country's dedication to the war effort: "Now all the youth of England are on fire... They sell the pasture now to buy the horse, / Following the mirror of all Christian kings ...." Act II includes a plot by the Earl of Cambridge and two comrades to assassinate Henry at Southampton. Henry's clever uncovering of the plot and his ruthless treatment of the conspirators show that he has changed from the earlier plays in which he appeared.In Act III Henry and his troops cross the English Channel to attack the French port of Harfleur. The Chorus appears again: "Grapple your minds to sternage of this navy/And leave your England, as dead midnight still". The French king, says the Chorus, "doth offer him / Catharine his daughter, and with her, to dowry, / Some petty and unprofitable dukedoms." Henry is not satisfied.At the siege of Harfleur, the English are beaten back at first, but Henry urges them on with one of Shakespeare's best-known speeches. "Once more unto the breach, dear friends, once more / Or close the wall up with our English dead...." After a bloody siege, the English take Harfleur, but Henry's forces are so depleted that he decides not to go on to Paris. Instead, he decides to move up the coast to Calais. The French assemble a powerful army and pursue him.