The Rainbow, the Midwife, and the Birds: Four Dene Tales (Spirit of Nature) (Paperback) 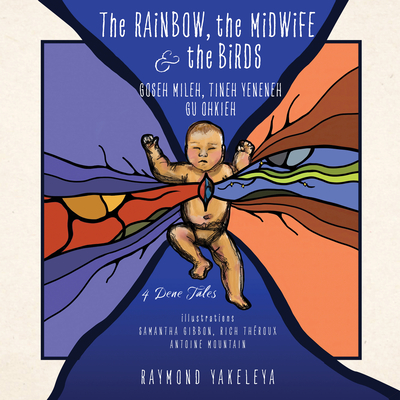 The book contains four Dene stories, as told by Raymond Yakeleya. "Flight Through the Rainbow" is about flying through a rainbow in a small plane and experiencing multi-sensations of colour. It also tells the legend of the spider and how its web catches raindrops that create the rainbow. "The Midwife and the Spirit of Life," dedicated to Raymond's Granny Harriet Gladue, is about the birth of babies and bringing their spirits into the world. "The Slingshot and the Songbird" is about a boy's sadness over killing a friendly songbird. "The Medicine Brothers and the Giant Birds" is a tale told to Raymond by his uncle George Blondin about the hazards of giant animals when the world was new. The book also contains Dene language translation of terms from the book.

Raymond Yakeleya is an award winning Dene television Producer, Director and Writer. Raymond is originally from Tulita (formally Fort Norman) in the central Northwest Territories and he now calls Edmonton home. Raymond has over 30 year experience in the film and television industry. The documentary films he has made have been selected for showing at festivals around the world including the John Grierson Film Festival, the Robert Faherty Festival and the Margaret Mead Film Festival, as well as the Museum of the American Indian in New York and the British Museum of Mankind in London. In 1979, Raymond produced, for CBC, the award-winning documentary titled We Remember, and in 1981 produced and directed The Last Mooseskin Boat, also an award winner, for the National Film Board. Raymond has also written and edited the books The Tree by the Woodpile and We Remember the Coming of the White Man, which includes links to his documentary We Remember. Raymond has always believed that Indigenous People need to have a voice in mainstream media in order to tell our People's stories, our way. With the passing of many of our Elders, the telling of these stories has become more important.