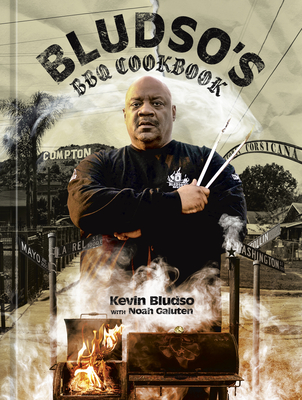 This is low and slow Texas BBQ done right: a family affair in smoke and soul, told through 75 recipes and stories from the founder of famous Los Angeles–based Bludso’s BBQ.

ONE OF THE BEST COOKBOOKS OF THE YEAR: The New York Times, Bon Appétit, Los Angeles Times

Kevin Bludso was born and raised in Compton, California, by a Black Panther–supporting mother and a police officer father. To stay out of trouble, he spent his summers in Corsicana, Texas, where he was schooled on the art of barbecue and worked long, hot hours on the pits at his granny’s legendary BBQ stand. In 2008, Kevin opened his own Bludso’s BBQ, a small walk-up stand in the heart of Compton that has led to multiple locations in California, Texas, and even Australia.

In this honest and engaging cookbook, Kevin teaches you everything you need to know about BBQ: from choosing, seasoning, and cleaning your pit to selecting your brisket, ribs, and sausages, plus all the rubs and sauces you could need. Kevin also shares seventy-five delicious recipes for main meats such as BBQ Lamb Leg, Spicy Curried Oxtails, Buffalo Rib Tips, Blackened Catfish, and Grilled Mojo Shrimp; sides such as Creole Cabbage, Pinto Beans, and Down Home Mac & Cheese; and even desserts such as Mom’s Banana Pudding, Buttermilk Pie, and Kevin’s famous Hennessy on the Rocks, along with mouthwatering photographs to accompany them. But Bludso’s BBQ Cookbook is also a story about Kevin's family and community. It’s a love letter to the often misunderstood city of Compton, and the story of how Kevin has fed and supported his own community while teaching everyone the art of barbecue.

This is more than a cookbook; it’s Kevin’s incredibly personal story of family, food, and how following your passion sometimes leads you back home.

Kevin Bludso is a chef, television personality, and two-time Steve Harvey Neighborhood Award winner. In 2008, he opened Bludso’s BBQ in Compton, California, and it has since grown into an international empire, with a flagship restaurant, Bludso’s Bar & Que, in Hollywood, a concession stand at the LAFC soccer stadium, a location in Proud Bird by LAX, and a sprawling restaurant and bar called San Antone by Bludso’s BBQ in the Crown Casino in Melbourne, Australia. He is returning for a second season as a the star of Netflix’s hit BBQ competition show The American Barbecue Showdown, and has multiple television appearances on shows such as Diners, Drive-Ins and Dives and Bong Appétit, and as a recurring guest judge on Bar Rescue. Kevin currently resides in Corsicana, Texas, regularly traveling both nationally and internationally for his pop-up events and television appearances.

Noah Galuten is a chef, restaurant consultant, and James Beard Award–nominated cookbook author. After working as a food writer, he trained in Compton under Kevin Bludso and became the chef of the ever-popular Bludso’s Bar & Que in Los Angeles. Noah went on to work on the launches of beloved Los Angeles restaurants Cofax Coffee, Prime Pizza (now with four locations), and Yojimbo. He also co-authored Phaidon’s On Vegetables: Modern Recipes for the Home Kitchen with Jeremy Fox—and his debut solo cookbook, The Don’t Panic Pantry Cookbook, is coming out in the fall of 2022.

Eric Wolfinger is a James Beard Award–winning photographer whose idea of a good time always involves fire and food. When not shooting photos, he works as a short-order cook for his partner and their two kids in San Diego.

Demetrius Smith is a wedding, portrait, sports, and event photographer who lives in the West Valley of Arizona. He is inspired by his beautiful wife, Aunjel Smith, from both sides of the lens.