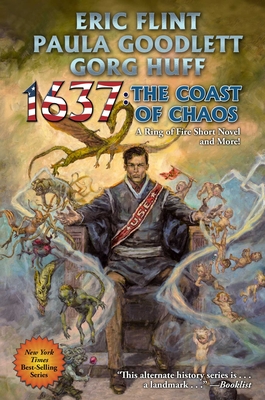 This is book number 34 in the Ring of Fire series.

In 1632, an unexplained temporal and spatial phenomenon known as the Ring of Fire transported the blue collar town of Grantville, West Virginia, smack-dab in the middle of the Thirty Years War. When the dust settles, it becomes clear that the town of Grantville isn't going anywhere, and the can-do Americans of the twenty-first century begin altering the course of history forever.

Five years later, the effects reach from the Old World to the New, but the course of exploration and colonization looks much different than it did in our time line. The French bought the English possessions in North America in 1633, but didn’t do much with the uncivilized backwater, and now the new king of France, Gaston I, wants to seize the territory and establish French control over it.

About 1637: The Coast of Chaos:
“. . . skilled authors seamlessly weave together historical and fictional characters, making it an easy read for fans old and new to the series.” —Booklist

About 1637: No Peace Beyond the Line:
“The action is non-stop. The authors skillfully blend battle, intrigue, politics, and everyday life in a remade seventeenth century to yield an exciting story. Both those familiar with the series (and this sequel’s predecessor) and those reading No Peace Beyond the Line as a first exposure to an addictive series will find it satisfying reading.” —Ricochet.com


About 1635: A Parcel of Rogues:
“The 20th volume in this popular, fast-paced alternative history series follows close on the heels of the events in The Baltic War, picking up with the protagonists in London, including sharpshooter Julie Sims. This time the 20th-century transplants are determined to prevent the rise of Oliver Cromwell and even have the support of King Charles.”—Library Journal

About 1634: The Galileo Affair:
“A rich, complex alternate history with great characters and vivid action. A great read and an excellent book.”—David Drake

About Eric Flint's Ring of Fire series:
“This alternate history series is . . . a landmark.”—Booklist

Eric Flint is a modern master of alternate history fiction, with 3 million books in print. He’s the author/creator of the multiple New York Times best-selling Ring of Fire series, starting with first novel 1632. With David Drake he has written six popular novels in the “Belisarius” alternate Roman history series, and with David Weber, he has collaborated on 1633 and 1634: The Baltic War, as well as four novels in Weber’s Honorverse series. Flint was for many years a labor union activist. He lives near Chicago, Illinois.

Gorg Huff is a Texas citizen who has enthusiastically helped in researching the 1632 series background, written numerous stories for the Grantville Gazettes, and contributed both maps and drawings to 1634: The Bavarian Crisis. Gorg began as a solo writer, but now principally teams with Paula Goodlett.

Paula Goodlett retired from the military as a non-commissioned officer in the early nineties. She broke her leg in 2003, which led to her browsing Baen's Bar lest she become bored during her enforced inactivity. Captivated by the 1632 universe concept, she began as a special assistant to Eric Flint. She eventually wrote a large important sequence of the storyline in 1634: The Ram Rebellion. She is editor of the Grantville Gazettes and chairs the 1632 Editorial Board. Additionally, Paula is assistant editor of the e-zine Jim Baen's Universe. Paula mainly writes in tandem with Gorg Huff.