The Maker of Swans (Hardcover) 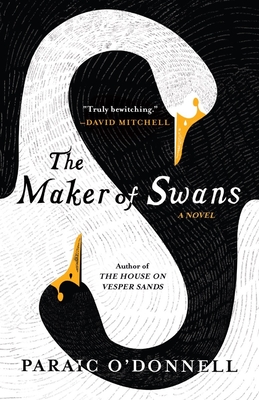 A New York Times BEST BOOK OF THE SUMMER

A CrimeReads & Book and Film Globe BEST BOOK OF THE YEAR

A Tor.com BEST BOOK OF JUNE

It is no small matter, after all, to create something—to make it so only by setting down the words. We forget the magnitude, sometimes, of that miracle.

In the dead of night, shots ring out over the grounds of a sprawling English estate. The world-weary butler Eustace recognizes the gunman—his longtime employer, Mr. Crowe—and knows he must think and act quickly. Who is the man lying dead on the lawn? Who is the woman in his company? Can he clean up his master’s mess like he always has before? Or will this bring a new kind of reckoning?

Mr. Crowe was once famed for his gifts—unaccountable gifts, known only to the members of a secretive order. Protected and privileged, he was courted by countesses and great men of letters. But he has long since retreated from that glittering world, living alone but for Eustace and Clara, his mysterious young ward. He has been content to live quietly, his great library gathering dust and his once magnificent gardens growing wild. He has left the past behind. Until now.

Because there are rules, even for Mr. Crowe and his kind, that cannot be broken. And this single night of passion and violence will have consequences, stirring shadows from the past and threatening those he now cares for. He and the faithful Eustace will be tested as never before. So too will Clara, whose own extraordinary gifts remain hidden, even from herself. If she is to save them all, she must learn to use them quickly and unlock the secret of who she is.

It is a secret beyond imagining. A secret that will change everything.

Paraic O’Donnell is the author of The House on Vesper Sands. He lives in Wicklow, Ireland with his wife and two children, and can usually be found in the garden.

A darkly gorgeous novel of intrigue and secrets.
— The New York Times

Starts at a leisurely trot and works its way up to a gallop. . . . the first act is meticulous in its preparation for the twists that follow.
— The New York Times Magazine

Evocative and beautiful. . . . O'Donnell is a master craftsman of language and storytelling.
— Kirkus Reviews

Utterly beautiful. . . . An enthralling dance over the line between literary fiction and magical fantasy.
— BookPage

The Maker of Swans takes Paraic O’Donnell’s mastery (he is also known for The House on Vesper Sands, his second book) to deep, heart-shaking, and frightening revelations. Brace for flame and sorcery, and a hidden order of the powerful.

For readers who like secrets to be revealed piece by tantalizing piece.
— Napa Valley Register

I devoured this book and it kept me guessing right to the very end.
— Laura Barnett, author of The Versions of Us

It starts with a bang and keeps going.
— Jon McGregor, author of Lean Fall Stand

Dazzlingly.
— Jane Casey, author of The Stranger You Know

A mesmerizing book.
— Sandra Newman, author of The Heavens

Has that wonderfully dark, magical feel to it.
— ELLE