Murder, Rape, and Torture in a Catholic Nunnery (Paperback) 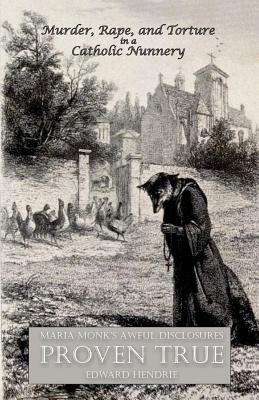 By Edward Hendrie
$17.25
Available from our Distributors - Usually arrives in-store in 2-7 days
(This book cannot be returned.)

There has probably not been a person more maligned by the powerful forces of the Roman Catholic Church than Maria Monk. In 1836 she published the famous book, Awful Disclosures of the Hotel Dieu Nunnery of Montreal. In that book, she told of murder, rape, and torture behind the walls of the cloistered nunnery. Because the evidence was verifiably true, the Catholic hierarchy found it necessary to fabricate evidence and suborn perjury in an attempt to destroy the credibility of Maria Monk. The Catholic Church has kept up the character assassination of Maria Monk now for over 175 years. Edward Hendrie has examined the evidence and set it forth for the readers to decide for themselves whether Maria Monk was an impostor or a brave victim. An objective view of the evidence leads to the ineluctable conclusion that Maria Monk told the truth about what happened behind the walls of the Hotel Dieu Nunnery of Montreal. The Roman Catholic Church, which is the most powerful religious and political organization in the world, has engaged in an unceasing campaign of vilification against Maria Monk. Its crusade against Maria Monk, however, can only affect the opinion of the uninformed. It cannot change the evidence. The evidence speaks clearly to those who will look at the case objectively. The evidence reveals that the much maligned Maria Monk was a reliable witness who made awful but accurate disclosures about life in a cloistered nunnery.