When We Were Outlaws (Paperback) 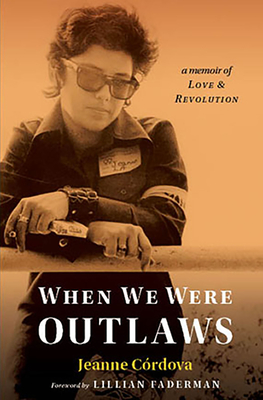 By Jeanne Cordova
$14.95
This title is likely Out of Print or otherwise unavailable

A sweeping memoir, a raw and intimate chronicle of a young activist torn between conflicting personal longings and political goals. When We Were Outlaws offers a rare view of the life of a radical lesbian during the early cultural struggle for gay rights, Women's Liberation, and the New Left of the 1970s. Brash and ambitious, activist Jeanne C rdova is living with one woman and falling in love with another, but her passionate beliefs tell her that her first duty is "to the revolution" -to change the world and end discrimination against gays and lesbians. Trying to compartmentalize her sexual life, she becomes an investigative reporter for the famous, underground L.A. Free Press and finds herself involved with covering the Weather Underground, Angela Davis; exposing neo-Nazi bomber Captain Joe Tomassi, and befriending Emily Harris of the Symbionese Liberation Army. At the same time she is creating what will be the center of her revolutionary lesbian world: her own newsmagazine, The Lesbian Tide, destined to become the voice of the national lesbian feminist movement. By turns provocative and daringly honest, Cordova renders emblematic scenes of the era--ranging from strike protests to utopian music festivals, to underground meetings with radical fugitives--with period detail and evocative characters. For those who came of age in the '70s, and for those who weren't around but still ask 'What was it like?' -Outlaws takes you back to re-live it. It also offers insights about ethics, decision making and strategy, still relevant today. With an introduction by renowned lesbian historian Lillian Faderman, When We Were Outlaws paints a vivid portrait of activism and the search for self-identity, set against the turbulent landscape of multiple struggles for social change that swept hundreds of thousands of Americans into the streets.

Cordova's previous books include Kicking the Habit, A Lesbian Nun Story, and Sexism; It's a Nasty Affair. Her essays appear in numerous anthologies such as Persistent Desire; A Femme Butch Reader, and Love, West Hollywood.

"A riveting unique first hand telling of a dangerous, fractious, creative lesbian time, the lesbian feminist 70s with their messy, sexy, bold social and personal visions live again on Cordova's pages; she was thick in the middle of things, as a journalist, as an activist, as a lover."
--Joan Nestle, editor of A Persistent Desire, A Femme Butch Reader and GENDERqUEER, Voices from Beyond the Sexual Binary.

For LGBT people who care about activism, especially those young enough to have no memory of those iconic times, Córdova's "memoir of love and revolution" should be a must-read.”
--Filed By Patricia Nell Warren

"When We Were Outlaws, is such an important addition to the literary cannon of LGBT non-fiction. The book manages to be captivating, heartbreaking, and gratifying all at once.”
--The Advocate by Diane Anderson Minshall