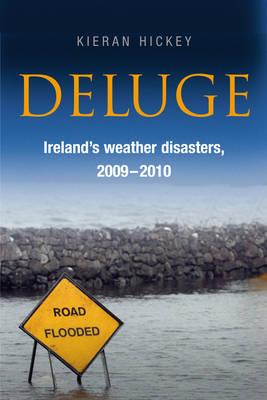 By Kieran Hickey
Likely Out of Print, but possibly available from the Publisher. Call for more info

During the twelve-month period from the summer of 2009 to the summer of 2010, Ireland experienced a remarkable sequence of weather disasters not seen for a generation or more. November 2009 was the wettest month in over 200 years in many parts of the country, and torrential rain led to severe flooding, especially in the west. Vast tracts of countryside and numerous villages and towns were inundated, including many new housing estates. In some places, the floods lasted until February 2010. This coincided with one of the most severe and persistent cold spells ever recorded in Ireland, with temperatures dropping below -15 degrees C in certain areas. There were thousands of falls and injuries, and many road-traffic accidents and further domestic flooding caused by burst pipes. Salt and sand ran out, energy-consumption soared, and schools were shut down. When the snow and ice melted, many areas - which had only recently dried out from the previous deluges - were re-flooded. This book explains these events, the rarity of the occurrences, and their dramatic impacts. Consideration is also given to the role of planning process, the management of waterways (especially the major dams), the role of local authorities, the response of central government, and the legal situation regarding clean-up procedures.