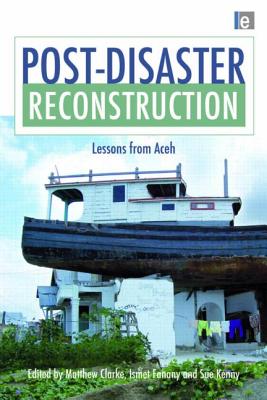 By Matthew Clarke (Editor), Ismet Fanany (Editor), Sue Kenny (Editor)
Likely Out of Print, but possibly available from the Publisher. Call for more info
(This book cannot be returned.)

On Sunday 26 December 2004, a tsunami of up to 30 metres high hit the northern tip of Sumatera in Indonesia, causing immediate destruction and the deaths of at least 130,000 in Indonesia alone. The scale of the devastation and ensuing human suffering prompted the biggest response endeavour to any natural disaster in history. Post-Disaster Reconstruction will be the first major book that analyses the different perspectives and experiences of the enormous post-tsunami reconstruction effort. It looks specifically at the reconstruction efforts in Aceh, one of the regions most heavily-hit by the tsunami and a province that has until recently suffered nearly three decades of armed conflict. Positioning the reconstruction efforts within Aceh's multi-layered historical, cultural, socio-political and religious contexts, the authors explore diverse experiences and assessments of the reconstruction. It considers the importance of the political and religious settings of the reconstruction, the roles of communities and local non-government organisations and the challenges faced by Indonesian and international agencies. From the in-depth examination of this important case study of disaster reconstruction - significant not only because of the huge scale of the natural disaster and response but also the post-conflict issues - the editors draw together the lessons learned for the future of Aceh and make general recommendations for post-disaster and post-conflict reconstruction-making.

Associate Professor Matthew Clarke is the Course Director of the postgraduate International and Community Development program at Deakin University, Australia. He has also written on the Millennium Development Goals, climate change, HIV and AIDS and human well-being indicators. Dr Ismet Fanany lectures in Indonesian language and culture at Deakin University, Australia. His research interests includes capacity building within local Indonesian non-governmental organisations. His most recent publications include topics on Malay proverbs and metaphors and language and public policy. In addition, he also writes fiction and translates from English into Indonesian. Professor Sue Kenny is the Director of the Centre for Citizenship, Development and Human Rights at Deakin University, Australia. She has extensive research and consultancy experience in community development and non-government organisations, about which she has published widely. Her study of post-tsunami Aceh has been part of a six year project investigating capacity-building in Indonesia.