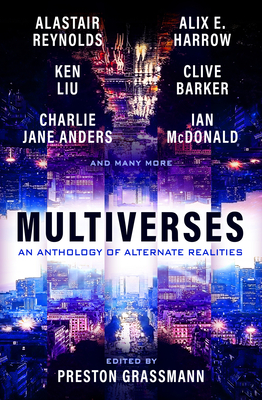 A mind-blowing anthology of 18 stories bringing you the infinite Earths of the multiverse.

What if every decision you’ve ever made created a new reality. A new life, a new world of possibilities for what you could become? What if the best of all possible worlds is just around the corner? Or the worst?

This anthology brings together an international cast of luminaries to explore the infinite worlds of what could be. The smashed together chaos of multiple Londons piled on top of each other; a world where a tunnel turns Japan and the United States into close neighbours; catastrophic accidents on multidimensional spacecraft; shadowy organisations and the merciless assassins they control; the unstoppable force of your infinite grandmothers.

Explore the infinite beauties and terrors of the multiverse with the finest minds writing in science fiction today, and see what could have been…

Preston Grassmann is a Shirley Jackson Award-nominated editor, writer, and translator. He was born in California and spent part of his life on the same block as Philip K. Dick. His most recent work has been published in Nature Magazine, Strange Horizons, PS Publishing, Apex, Shoreline of Infinity, and Futures 2 (Tor). One of his short-stories – “Cael’s Continuum” – was nominated for a Reader’s Choice Award at Tor.com. His non-fiction work and various interviews have appeared in publications such as Nature Magazine, New York Review of Science Fiction, Locus, and Bull Spec. He is a regular contributor to Nature and currently lives in Japan.