Doctor Who: The Stones of Blood (Target Collection) (Paperback) 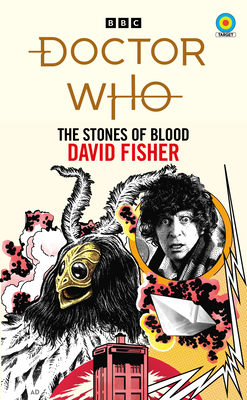 "We won't find Dracula hanging around the Manor. But we may find something equally disturbing..." The Doctor is delighted when his quest for the Key to Time leads him to his favourite planet, Earth. But his friends are less enchanted: Romana is nearly lured to her death by a sinister apparition, and K9 is all but destroyed by a belligerent boulder with the power to move - and a thirst for blood. An ancient stone circle becomes a battleground as the Doctor must outwit the deadliest alien criminal this side of hyperspace - and her bloodthirsty silicon servants...

David Fisher was approached by script editor Anthony Read to write for Doctor Who and the result was the 100th story, The Stones of Blood, transmitted in 1978. Fisher first met Read when the latter was setting up a series called The Troubleshooters in 1965. Fisher went on to write for Orlando (1967), Dixon of Dock Green (1969), Sutherland's Law (1973) and General Hospital (1977). As well as The Stones of Blood, Fisher also contributed The Androids of Tara, The Creature from the Pit and The Leisure Hive to Doctor Who. The first two stories were novelised by Terrance Dicks, but Fisher decided to pen the latter two himself for the Target range. Following his work on Doctor Who, Fisher wrote for Hammer House of Horror (1980), Hammer House of Mystery and Suspense (1984) and collaborated with Read on a number of historical books with subjects including World War Two espionage, the Nazi persecution of Jews and the Nazi/Soviet pact of the early 1940s.