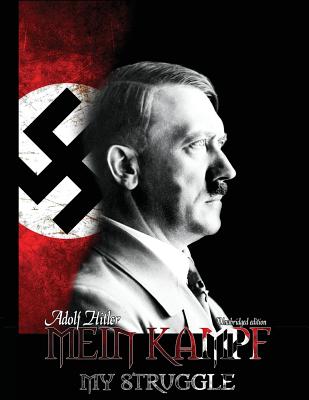 Mein Kampf ("My Struggle") is a political manifesto written by Adolf Hitler. It was his only complete book and became the bible of National Socialism in the German Third Reich. It was published in two volumes, which dated 1925 and 1927. By 1939 it had sold 5,200,000 copies and had been translated into 11 different languages. The first volume, entitled Die Abrechnung ("The Settlement of Accounts," or "Revenge"), was written in 1924 in the Bavarian fortress of Landsberg am Lech. Hitler was imprisoned there after the unsuccessful Beer Hall Putsch of 1923. It describes the world of Hitlers youth, the First World War and the betrayal of Germany in 1918. It also expresses Hitlers Racial ideology. According to Hitler, it was necessary for Germans to occupy themselves not merely with the breeding of cats, dogs and horses - but also care for the health and wellbeing of their own Bloodline. The second volume, entitled Die Nationalsozialistische Bewegung ("The National Socialist Movement"), was written after Hitlers release from prison in December 1924. It outlines the political program of National Socialism and includes the measures that National Socialism must pursue in both gaining power and in exercising it thereafter in the new German Reich. In this book Hitler describes an ideology which according to him must shake the world from its slumber. An ideology which is based on the Eternal Laws of Nature. Here you can notice how the foundations of Social Darwinism have been applied in practice. This book has set a path toward a much higher understanding of the self and of our magnificent destiny as living beings part of this Race on our planet. It shows us that we must not look at nature in terms of good or bad, but in an unfiltered manner. It describes what we must do if we want to survive as a people and as a Race. We have to understand that Nature does not forgive weakness and that the truth and reality is what it is, no matter how bad it may seem or how hard it can portray itself. This book shows the foundations of White Resistance and White Nationalism. It is the foundation and seed for the preservation of our Race. Be advised that this book does not represent the full Racialist ideology, but it is only a foundation as the Origin of Species is a foundation for the Theory of Evolution. James Murphy translation is OFFICIAL NSDAP translation.. NSDAP have paid Murphy to translate Mein Kampf...