Once and Forever: The Tales of Kenji Miyazawa (Paperback) 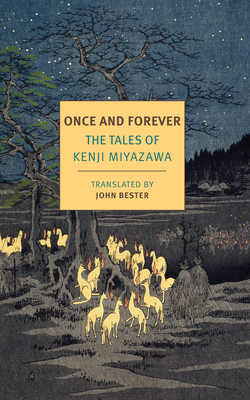 A collection of classic, fantastical tales from Northern Japan that are equal parts whimsical and sophisticated, perfect for readers of all ages.

Kenji Miyazawa is one of modern Japan’s most beloved writers, a great poet and a strange and marvelous spinner of tales, whose sly, humorous, enchanting, and enigmatic stories bear a certain resemblance to those of his contemporary Robert Walser. John Bester’s selection and expert translation of Miyazawa’s short fiction reflects its full range from the joyful, innocent “Wildcat and the Acorns,” to the cautionary tale “The Restaurant of Many Orders,” to “The Earthgod and the Fox,” which starts out whimsically before taking a tragic turn. Miyazawa also had a deep connection to Japanese folklore and an intense love of the natural world. In “The Wild Pear,” what seem to be two slight nature sketches succeed in encapsulating some of the cruelty and compensations of life itself.

Kenji Miyazawa (1896–1933) was born in Iwate, one of the northernmost prefectures in Japan. In high school, he studied Zen Buddhism and developed a lifelong devotion to the Lotus Sutra, a major influence on his writing. After graduating from an agricultural college, he moved to Tokyo to begin his writing career but had to return home to care for a sick sister. He remained in his home in Iwate for the rest of his life. One of his best-known works is the novel Night on the Galactic Railroad, which was adapted into anime in the late twentieth century, as were many of his short stories. Much of his poetry is still popular in Japan today.

John Bester (1927–2010) was a renowned translator of Japanese fiction, including Masuji Ibuse’s Black Rain, Kenzaburo Oe’s The Silent Cry, and Yukio Mishima’s Acts of Worship: Seven Stories, for which he received the Noma Award for the Translation of Japanese Literature.

"Now, finally, we have been given a collection of Miyazawa’s stories...Like the tales of Andersen and the Grimms, many of the stories in Once and Forever may appeal to children: the sort of thoughtful, dark-minded children who like Neil Gaiman’s Coraline. But adults will be the primary audience for the shivers of disturbance these stories send up the spine….for readers who relish the disturbing material of fairy tale, the specificity and surprise of tanka, collisions of the everyday with the supernatural and glimpses of Japan right on the brink of industrialization, this English volume of Kenji Miyazawa’s odd, masterly stories will be a delight.” —Emily Barton, The New York Times Book Review

"I can’t say there’s a Miyazawa story for everything—the writer died young and lived nearly a century ago in rural northern Japan—but he had stories for many of our basic human vices, and for our basic forms of goodness, too. And this only scratches the surface of his work’s appeal. . . The stories have a timeless quality and a resemblance to fairy tales or children’s literature. . . Everything in Miyazawa’s work seethes with life. Each leaf, flower, blade of grass, and berry seems to have its own special action." —Valerie Stivers, The Paris Review


"These tales turn familiar fairy-tale rhythms on their hands, balancing chaos and kindness, the natural and the supernatural, the unsettling and  the inspiring. It will be right at home in any library of short stories or modern folklore.” —Genevieve Valentine, NPR, "Best Books of 2018"


“Kenji Miyazawa fables are international-class.” —David Mitchell
"In the transcendent stories of Miyazawa, Earth teems with magic and wonder....While Miyazawa does not eschew the tropes of folktales—his forests teem with talking animals, magic stones, and moral lessons—this collection proves his poetic voice and craft transcend the genre." —Publishers Weekly

“Miyazawa moves you to sorrow, to laugh, chuckle, marvel—he makes you live the things he describes.” —Hiroaki Sato

"A marvelous writer who deserves to be much better known in English." —Kirkus

"Miyazawa seems to have been something of a genius." —The Observer

"A humble and gifted writer." —Time

"Miyazawa's tales beg to be read and reread slowly and out loud." —Asiaweek

"The work of a truly good man and a great writer." —Insight Japan