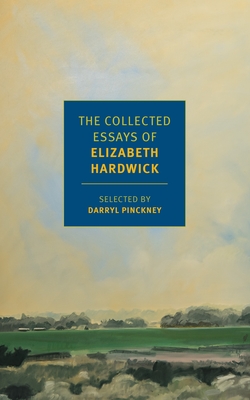 The first-ever collection of essays from across Elizabeth Hardwick's illustrious writing career, including works not seen in print for decades.

Elizabeth Hardwick wrote during the golden age of the American literary essay. For Hardwick, the essay was an imaginative endeavor, a serious form, criticism worthy of the literature in question. In the essays collected here she covers civil rights demonstrations in the 1960s, describes places where she lived and locations she visited, and writes about the foundations of American literature—Melville, James, Wharton—and the changes in American fiction, though her reading is wide and international. She contemplates writers’ lives—women writers, rebels, Americans abroad—and the literary afterlife of biographies, letters, and diaries. Selected and with an introduction by Darryl Pinckney, the Collected Essays gathers more than fifty essays for a fifty-year retrospective of Hardwick’s work from 1953 to 2003. “For Hardwick,” writes Pinckney, “the poetry and novels of America hold the nation’s history.” Here is an exhilarating chronicle of that history.

Elizabeth Hardwick (1916–2007) was born in Lexington, Kentucky, and educated at the University of Kentucky and Columbia University. A recipient of a Gold Medal from the American Academy of Arts and Letters, she is the author of three novels, a biography of Herman Melville, and four collections of essays. She was a co-founder and advisory editor of The New York Review of Books and contributed more than one hundred reviews, articles, reflections, and letters to the magazine.

Darryl Pinckney selected The New York Stories of Elizabeth Hardwick (2010). He is the author of two novels, High Cotton (1992) and Black Deutschland (2016), and of two works of nonfiction, Out There: Mavericks of Black Literature (1992) and Blackballed: The Black Vote and US Democracy (2014). He also worked for Robert Wilson on his productions of The Forest, Orlando, Time Rocker, The Old Woman, Letter to a Man, and Garrincha: A Street Opera.

"In good fiction, every sentence and detail is necessary. The same is true of these impeccably economical essays, which, collected here with a wise introduction by Pinckney, offer a rich immersion in both [Hardwick’s[ brilliant mind and the minds of so many others….Astringent and unsentimental, these essays span over half a century and, as such, constitute a monumental, if unwitting, autobiography." —Hermione Hoby, The New York Times

“Elizabeth Hardwick, long recognized as one of the great literary critics of the 20th century, is generously represented by this selection of her eloquent, erudite, chatty, and often very witty essays and reviews, with a warmly sympathetic and informative introduction by Darryl Pinckney.” —Joyce Carol Oates

"Hardwick’s Collected Essays is an authoritative immersion in American writing….It’s a Who’s Who of American writers, or those who came to America to write. Here are Dylan Thomas’s last days in New York, when it seems always 'the dead, anguished middle of a drunken night'; Truman Capote’s 'unique crocodilian celebrity'; WH Auden, Isherwood, Henry James, Nabokov, Mailer, Frost, Elizabeth Bishop, to name but a few. Hardwick can send you back to what you’ve admired, or give you a list of books you wish you had read.” —Olivia Cole, Financial Times

“How crucial it is to have Hardwick’s Collected Essays now. For they are incorruptible. Their intelligence is prodigious, but never boastful. This major American writer dares, inspires, and cajoles us into reading and writing with renewed conviction and resistance to the meretricious." —Catharine R. Stimpson

"This collection, edited and with an introduction by her former student Pinckney, is significant. Hardwick, who was a cofounder, editor, and advisor to the New York Review of Books, covered the important events of her time (the civil rights and women’s movements, protests against the Vietnam War) with clarity and precision and without sentimentality. Her ear for language and eye for detail, i.e., her novelist’s sensibility (she published three), makes her sketches and essays a pleasure to read and savor. Pinckney's introduction offers insights into Hardwick's keen intelligence and quick wit.” —Library Journal, starred review

“Throughout her . . . career, Hardwick was devoted to pursuing literature as a way of life and finding life in literature.” —Kirkus Reviews

"This fine, revealing career retrospective showcases the late Hardwick, a novelist and cofounder of the New York Review of Books, honing her favorite form, the literary review, to razor-sharp precision...this book contains ample examples of literary criticism that might be imitated or even matched but not surpassed in its style, insight, and genuine love for literature." —Publishers Weekly

“Just as Edwin Denby, Clement Greenberg, and Pauline Kael transformed the nature of criticism in the fields of dance, art, and film, respectively, Hardwick has redefined the possibilities of the literary essay.” —The New Yorker

“Hardwick wrote when she had something to say, and she took her time; the impression of ease is owing strictly to her style. Not a poet, she produced a poet’s prose...” —The Guardian

“Elizabeth Hardwick is our most original, brilliant, and amusing critic. Many of these essays are already classics for their insight and style.” —Diane Johnson

“Hardwick has a gift for coming up with descriptions so thoughtfully selected, so exactly right, that they strike the reader as inevitable.” —Anne Tyler