The Accommodation: The Politics of Race in an American City (Hardcover) 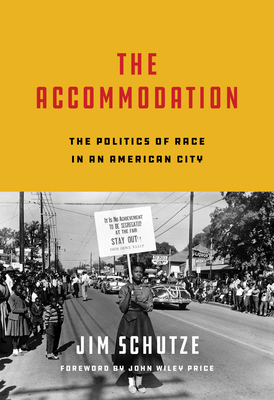 The powerful, long-repressed classic of Dallas history that examines the violent and suppressed history of race and racism in the city. Written by longtime Dallas political journalist Jim Schutze, formerly of the Dallas Times Herald and Dallas Observer, and currently columnist at D Magazine, The Accommodation follows the story of Dallas from slavery through the Civil Rights Movement, and the city's desegregation efforts in the 1950s and '60s.

Known for being an uninhibited and honest account of the city's institutional and structural racism, Schutze's book argues that Dallas' desegregation period came at a great cost to Black leaders in the city. Now, after decades out of print and hand-circulated underground, Schutze's book serves as a reminder of what an American city will do to protect the white status quo.

Jim Schutze is an acclaimed journalist and author. A longtime political journalist at the Dallas Times Herald and the Dallas Observer, and former Dallas bureau chief of the Houston Chronicle, Schutze currently is a columnist at D Magazine. He has earned many honors for his writing, winning the Association of Alternative Newsweeklies' national award for best commentary twice and Lincoln University's national Unity Award for writing on civil rights and racial issues three times. Two of his books were finalists for the national Edgar Allen Poe award for crime writing. In 2011, Schutze was admitted to the Texas Institute of Letters in recognition of his career as a journalist and author. John Wiley Price is the ranking member of the Dallas County Commissioner's Court. The first African American elected to the court, Price has served as Dallas County commissioner for District 3 since 1985. In addition to his political service, Price founded KwanzaaFest, the largest community cultural event in Texas, in 1991.