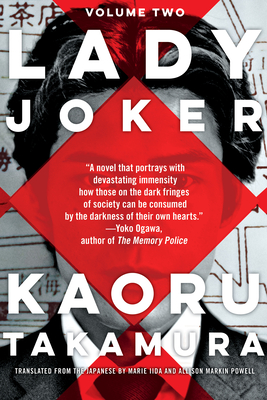 “A novel that portrays with devastating immensity how those on the dark fringes of society can be consumed by the darkness of their own hearts.”
—Yoko Ogawa, author of The Memory Police

This second half of Lady Joker, by Kaoru Takamura, the Grand Dame of Japanese crime fiction, concludes the breathtaking saga introduced in Volume I.

Inspired by the real-life Glico-Morinaga kidnapping, an unsolved case that terrorized Japan for two years, Lady Joker reimagines the circumstances of this watershed episode in modern Japanese history and brings into riveting focus the lives and motivations of the victims, the perpetrators, the heroes and the villains. As the shady networks linking corporations to syndicates are brought to light, the stakes rise, and some of the professionals we have watched try to fight their way through this crisis will lose everything—some even their lives. Will the culprits ever be brought to justice? More importantly—what is justice?

Kaoru Takamura was born in Osaka in 1953 and is the author of thirteen novels. Her debut, Grab the Money and Run, won the 1990 Japan Mystery and Suspense Grand Prize, and since then her work has been recognized with many of Japan’s most prestigious awards for literary fiction as well as for crime fiction: the Naoki Prize, the Noma Literary Award, the Yomiuri Prize, the Shinran Prize, the Jiro Osaragi Prize, the Mystery Writers of Japan Award, and the Japan Adventure Fiction Association Prize. Lady Joker, her first novel to be translated into English, received the Mainichi Arts Award and has been adapted into both a film and a television series.

Allison Markin Powell is a literary translator, editor, and publishing consultant. She has been awarded grants from English PEN and the NEA, and the 2020 PEN America Translation Prize for The Ten Loves of Nishino by Hiromi Kawakami. Her other translations include works by Osamu Dazai, Kanako Nishi, and Fuminori Nakamura. She was the guest editor for the first Japan issue of Words Without Borders, and she maintains the database Japanese Literature in English.

Marie Iida has served as an interpreter for the New York Times bestselling author Marie Kondo’s Emmy-nominated Netflix documentary series, Tidying Up with Marie Kondo. Her nonfiction translations have appeared in Nang, MoMA Post, Eureka and over half a dozen monographs on contemporary Japanese artists and architects, including Yayoi Kusama, Toyo Ito, and Kenya Hara for Rizzoli New York. Marie currently writes a monthly column for Gentosha Plus about communicating in English as a native Japanese speaker.

“A sprawling, absorbing saga . . . Examines a vast web of characters affected by a kidnapping and sabotage case in Tokyo. The action moves fluidly from news desks to corporate offices, as the police and press track a shadowy crime group calling itself Lady Joker.”
—The Washington Post

“Like all literature, readers will take what they want from Takamura’s critique of Japanese society, but at the heart of the epic novel is a gripping crime story where the actual crime itself is almost secondary to the psychological ripples it sends through the boardrooms, police stations, press offices and homes of anyone connected. This is much more of a whydunit than a whodunit — and one that was well worth the wait.”
—The Japan Times

“Takamura joins American writers James Ellroy, author of American Tabloid, and Don Winslow, author of several novels about the drug trade, to illuminate a society in which power and money matter far more than morality. All three write mysteries that also function as morality plays . . . Bravura.”
—The Pittsburgh Post-Gazette

“[A] crime saga with impressive sweep.”
—The Complete Review

“A complex work of stunning breadth and depth by a master of the genre.”
—Kirkus Reviews

“Admirers of intricate crime fiction, which both engages the intellect and offers insights into the hidden parts of a society, will hope for further translations of this gifted author’s work.”
—Publishers Weekly

“[Lady Joker] is a work you get immersed in, like a sprawling 19th century novel or a TV series like “The Wire.” It reveals its world in rich polyphonic detail. Inspired by a real-life case, it takes us inside half a dozen main characters, follows scads of secondary ones and enters bars and boardrooms we could never otherwise go . . . Yet for all its digressions, Lady Joker casts a page-turning spell.”
—John Powers, NPR’s Fresh Air

“Like Ellroy’s American Tabloid and Carr’s The Alienist, the book uses crime as a prism to examine dynamic periods of social history . . . Takamura’s blistering indictment of capitalism, corporate corruption and the alienation felt by characters on both sides of the law from institutions they once believed would protect them resonates surprisingly with American culture.”
—Paula Woods, Los Angeles Times

“Like Don DeLillo’s Underworld, Takamura’s sprawling saga situates its crime plot in the context of corruption . . . A complex work of stunning breadth and depth by a master of the genre.”
—Kirkus Reviews, Starred Review