Hamilton and Me: An Actor's Journal (Paperback) 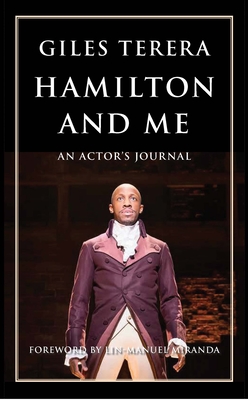 "Stand. Breathe. Look. Try to empty my mind. Somehow, for some reason, I have been brought to this place to tell this story, now. So tell it. That's all."

When Lin-Manuel Miranda's groundbreaking musical Hamilton opened in London's West End in December 2017, it was as huge a hit as it had been in its original production off- and on Broadway. Lauded by critics and audiences alike, the show would go on to win a record-equaling seven Olivier Awards--including Best Actor in a Musical for Giles Terera, for his portrayal of Aaron Burr.

For Terera, though, his journey as Burr had begun more than a year earlier, with his first audition in New York, and continuing through extensive research and preparation, intense rehearsals, previews and finally opening night itself. Throughout this time he kept a journal, recording his experiences of the production and his process of creating his award-winning performance. This book, Hamilton and Me, is that journal.

It offers an honest, intimate, and thrilling look at everything involved in opening a once-in-a-generation production--the triumphs, breakthroughs and doubts, the camaraderie of the rehearsal room and the moments of quiet backstage contemplation--as well as a fascinating, in-depth exploration of now-iconic songs and moments from the musical, as seen from the inside. It is also deeply personal, as Terera reflects on experiences from his own life that he drew on to help shape his acclaimed portrayal.

Illustrated with photographs, many of which are shared here
for the first time, and featuring an exclusive Foreword by Lin-Manuel Miranda, this book is an essential read for all fans of Hamilton--offering fresh, first-hand insights into the music and characters they love and know so well--as well as for aspiring and current performers, students, and anyone who wants to discover what it really felt like to be in the room where it happened.

Giles Terera MBE is an award-winning actor, musician, and writer. He trained at Mountview Theatre School and has worked consistently at venues such as the National Theatre, the Royal Shakespeare Company, and Shakespeare's Globe. He is best known for originating the role of Aaron Burr in the London production of the award-winning musical Hamilton, for which he won the 2018 Olivier Award for Best Actor in a Musical.His other theatre credits include Rosmersholm, The Tempest, Avenue Q, The Book of Mormon, 125th Street, Rent (West End); Ma Rainey's Black Bottom, Hamlet, Death and the King's Horseman, The Hour We Knew Nothing of Each Other, Troilus and Cressida, Candide, Honk! (National Theatre); The Merchant of Venice (Shakespeare's Globe/international tour); The Resistible Rise of Arturo Ui(Donmar Warehouse); Pure Imagination - The Songs of Lesley Bricusse (St. James's); King John (Shakespeare's Globe/UK tour); Don't You Leave Me Here (West Yorkshire Playhouse); The Playboy of the Western World (Abbey, Dublin); The Ratpack (West End/international tour); Jailhouse Rock (Theatre Royal Plymouth/West End); You Don't Kiss (Stratford Circus); Up on the Roof (Chichester); The Tempest (RSC); Six Degrees of Separation (Sheffield); Generations of the Dead (Young Vic); Bill Shakespeare's Italian Job (Playbox, Warwick/Gilded Balloon, Edinburgh); The Demon Headmaster/The Animals of Farthing Wood (Pleasance, Edinburgh).As a writer, his theatre work includes The Meaning of Zong (Bristol Old Vic), The Ballad of Soho Jones (St. James') and Black Matter (Crazy Coqs). As a filmmaker, Terera's first documentary, Muse of Fire--created with Dan Poole--centers on modern perspectives of Shakespeare and premiered on BBC Four in Autumn 2013. Terera was an associate producer on Poole's feature documentary The Space: Theatre of Survival and he wrote and directed the concert film Hello Harry! A Celebration.Terera was appointed a Member of the Order of the British Empire (MBE) in the 2020 New Year Honours for services to theatre.