Final Battle: The Next Election Could Be the Last (Hardcover) 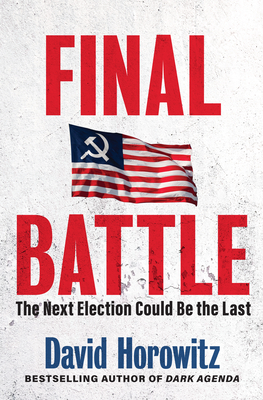 "Democrats have conducted a sustained assault on the spirit of compromise that binds the union together, and set the nation on the path to a one-party state."

"Nothing less than a handbook for the salvation of the United States of America."--DENNIS PRAGER

"Exposes the outrages perpetrated by the Biden administration and the Democratic Left."--DINESH D'SOUZA

"An ominous warning about what the future may hold if the present course is not reversed."--PETER SCHWEIZER

FINAL BATTLE exposes the real threat that Democrats pose to freedom. The rise of socialism and critical race theory, coupled with threats to the Electoral College and Senate, an independent judiciary, and the integrity of the electoral system, now threaten to destroy the traditions that bring Americans together -- the heart of our democracy.

Attacks on these quintessentially American customs codified by the Founding Fathers undermine the possibility of bipartisan solutions to common problems like viral pandemics and civil disorders. Americans now speak in different and antagonistic political languages, and the two parties are so polarized that the American way of life itself is at risk.

In his devastating expos of the Democrats' nefarious goals, New York Times bestselling author David Horowitz reveals the hallmarks of their strategies, including:

"Empires and states rise and fall while everybody is watching. Although the watchers may be surprised when the actual collapse occurs, with the hindsight provided by the end itself, everybody can see how it fell."

Read FINAL BATTLE before it's too late

David Horowitz is a noted conservative thinker, writer and commentator and the Founder and CEO of the David Horowitz Freedom Center in Los Angeles, CA, whose mission is "to defend free societies which are under attack from enemies within and without, both secular and religious;" and further, to defend the principles of individual freedom, the rule of law, private property, limited government and to reestablish academic freedom in American schools. The Freedom Center publishes the online news magazine FrontPageMag.com, where Horowitz serves as Editor-in-Chief. David Horowitz grew up a "red diaper baby" in a communist community in Sunnyside, Queens, and was one of the founders of the New Left in the 1960s and an editor of its largest magazine, Ramparts; but forced to confront some difficult truths about the political left, Horowitz ultimately found a political and intellectual home as a conservative activist. Cultural critic Camille Paglia has said of David Horowitz: "I respect the astute and rigorously unsentimental David Horowitz as one of America's most original and courageous political analysts. . . .I think that, a century from now, cultural historians will find David Horowitz's spiritual and political odyssey paradigmatic for our time." Norman Podhoretz, former editor of Commentary magazine, says of Horowitz: "David Horowitz is hated by the Left because he is not only an apostate but has been even more relentless and aggressive in attacking his former political allies than some of us who preceded him in what I once called 'breaking ranks' with that world. He has also taken the polemical and organizational techniques he learned in his days on the left, and figured out how to use them against the Left, whose vulnerabilities he knows in his bones." Horowitz has written more than a dozen books, including The New York Times bestsellers BLITZ: Trump Will Smash the Left and Win and BIG AGENDA: TRUMP'S REAL PLAN TO SAVE AMERICA and DARK AGENDA: THE WAR TO DESTROY CHRISTIAN AMERICA.The David Horowitz Freedom Center is located in Los Angeles, CA. https: //www.horowitzfreedomcenter.org/ http: //www.frontpagemag.com/