Professor Risley and the Imperial Japanese Troupe: How an American Acrobat Introduced Circus to Japan--And Japan to the West (Hardcover) 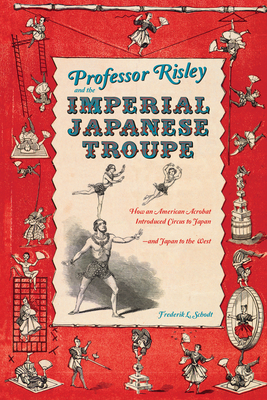 By Frederik L. Schodt
$35.00
This title is likely Out of Print or otherwise unavailable

Frederik L. Schodt has at long last unveiled the fascinating story of 'Professor Risley.' Circus scholars, history buffs, and anyone with an ounce of curiosity should be grateful to him.--Dominique Jando, Circopedia.org

Professor Risley (Richard Risley Carlisle) introduced the Western circus to Japan in 1864. Three years later, this former acrobat gave many in the West their first glimpse of Japan when he took his Imperial Japanese Troupe of acrobats and jugglers on a triumphant tour of North America and Europe. Over the next few years, the Troupe performed before presidents, monarchs, and ordinary citizens. Frederik L. Schodt argues compellingly that such early popular entertainments helped stir a curiosity about all things Japanese that eventually led to japonisme, The Mikado, and, in our time, the boom in manga and anime.

Schodt's depiction of Risley and his troupe is enlivened by portraits of the circus demimonde and supported by nineteenth-century photographs, posters, and drawings, many in color. His accounts of these first meetings between Westerners and Japanese shed new light on how different cultures meet, mingle, and influence each other. Descriptions of crowds, dazzling routines, and superstar troupe performers like the famous Little All Right are a delightful revelation to anyone interested in Asia, the circus, and popular entertainment.

Frederik L. Schodt has authored numerous books about Japan, including Manga Manga and Native American in the Land of the Shogun. In 2009 for his work he was awarded the Order of the Rising Sun, Gold Rays with Rosette.

Frederik L. Schodt: Frederik L. Schodt is a translator and author of numerous books about Japan, including The Astro-Boy Essays, Dreamland Japan, Native American in the Land of the Shogun, and The Four Immigrants Manga. He often served as Osamu Tezuka's English interpreter. In 2009 he received the The Order of the Rising Sun, Gold Rays with Rosette for his contribution to the introduction and promotion of Japanese contemporary popular culture. Frederik L. Schodt is an award-winning author of multiple books on the interplay of Japanese and American culture, with an emphasis on popular culture and on unique individuals who have made unusual cross-cultural contributions.