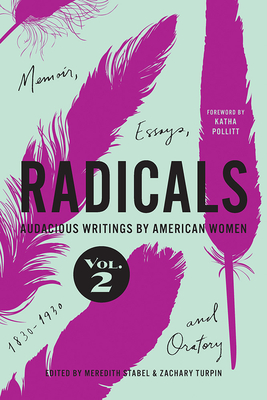 Emily Dickinson on sex, desire, and “the chapter . . . in the night.” Emma Goldman against the tyranny of marriage. Ida B. Wells against lynching. Anna Julia Cooper on Black American womanhood. Frances Willard on riding a bicycle. Perhaps the first of its kind, Radicals is a two-volume collection of writings by American women of the nineteenth and early twentieth centuries, with special attention paid to the voices of Black, Indigenous, and Asian American women.

In Volume 2: Memoir, Essays, and Oratory, selections span from early works like Sarah Mapps Douglass’s anti-slavery appeal “A Mother’s Love” (1832) and Maria W. Stewart’s “Address Delivered at the African Masonic Hall” (1833), to Zitkala-Sa’s memories in “The Land of Red Apples” (1921) and Charlotte Perkins Gilman’s moving final essay “The Right to Die” (1935). In between, readers will discover a whole host of vibrant and challenging lesser-known texts that are rarely collected today. Some, indeed, have been out of print for more than a century.

Unique among anthologies of American literature, Radicals undoes such silences by collecting the underrepresented, the uncategorizable, the unbowed—powerful writings by American women of genius and audacity who looked toward, and wrote toward, what Charlotte Perkins Gilman called “a lifted world.”

Meredith Stabel is a PhD candidate in English at the University of Iowa. She lives in Iowa City, Iowa.

Zachary Turpin is assistant professor of American Literature at the University of Idaho. He is the author and coeditor of such works as Every Hour, Every Atom: A Collection of Walt Whitman’s Early Notebooks and Fragments (Iowa, 2020). Turpin lives in Moscow, Idaho.

“This smart collection stands out for its inclusivity—of genres, of voices, and of writings whose very audacity has made them less widely known. Readers will meet new historical figures and also discover new dimensions of feminist authors they thought they already knew. The bold, lucid introduction is a bonus.”—Landon R. Y. Storrs, author, The Second Red Scare and the Unmaking of the New Deal Left