Witches, Feminism, and the Fall of the West (Hardcover) 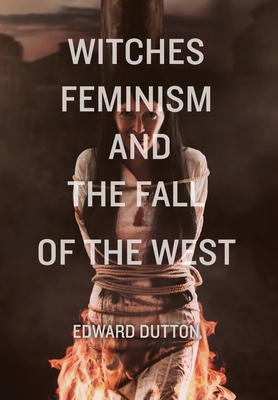 The archetype of the "witch" is burnt deep into the European psyche, recurring again and again in folklore and fairytales. But is she merely the stuff of fantasy? Roald Dahl warned that witches don't always don black hats and ride on broom sticks. They "dress in ordinary clothes, and look very much like ordinary women. . . . That is why they are so hard to catch."

In Witches, Feminism and the Fall of the West, Edward Dutton examines the history of witches and witch-hunting in light of evolutionary psychology. Throughout the centuries, witches were ostracized across Europe and often condemned and executed for sorcery and harming children. They generally adhered to a type: witches were low-status, anti-social, and childless, and their very presence was viewed as poisonous to the community. Dutton demonstrates that witches did, in their way, represent a maladaptive mentality and behavior, which undermined Europe's patriarchal system. When times got tough-that is, when Europe got poorer or colder-the witches were persecuted with a vengeance.

Today, the evolutionary situation has been turned on its head. The intense selection pressures of the past have been overcome by the Industrial Revolution and its technological marvels. Modern witches survive and thrive in the postmodern West, still possessed by the motivations and dispositions of their sisters of yore. "Sorcery" (nihilism and self-hatred) is no longer taboo but has become a high-status ideology. Roald Dahl was all-too correct. Witches do exist, and they mean to do us harm.