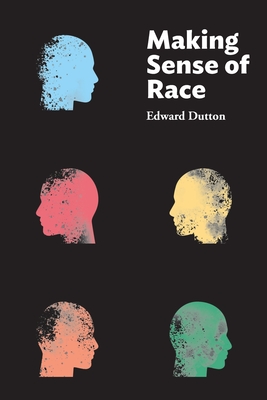 Race is our age's great taboo. Public intellectuals insist that it does not exist-that it's a "social construct" and biological differences between races are trivial or "skin deep." But as with taboos in other times, our attitude towards race seems delusional and schizophrenic. Racial differences in sports and culture are clear to everyone. Race is increasingly a factor in public health, especially in disease susceptibility and organ donation. And in a globalized world, ethnic nationalism-and ethnic conflict-are unavoidable political realities. Race is everywhere . . . and yet it's nowhere, since the topic has been deemed "out of bounds" for frank discussion.

Cutting through the contradictions, euphemisms, and misconceptions, Edward Dutton carefully and systematically refutes the arguments against the concept of "race," demonstrating that it is as much a proper biological category as "species."Making Sense of Race takes us on a journey through the fascinating world of evolved physical and mental racial differences, presenting us with the most up-to-date discoveries on the consistent ways in which races differ in significant traits as a result of being adapted to different ecologies. Intelligence, personality, genius, religiousness, sex appeal, puberty, menopause, ethnocentrism, ear-wax, and even the nature of dreams . . . Making Sense of Race will tell you everything you ever wanted to know about race, but might have been afraid to ask.

Edward Dutton is a prolific researcher and commentator, who has published widely in the field of evolutionary psychology. He is Editor at Washington Summit Publishers and Professor of Evolutionary Psychology at Asbiro University in L dź, Poland. Dutton is the author of many books, including J. Philippe Rushton: A Life History Perspective (2018), Race Differences in Ethnocentrism (2019), and Islam: An Evolutionary Perspective (2020).

Praise for Edward Dutton and Making Sense of Race

"Edward Dutton's new book, Making Sense of Race, is a godsend at a time when the university curriculum effectively censors human nature from much of the humanities and social sciences. This information, which comes wrapped in prodigious layers of data, is presented in a highly accessible, often funny, style. It should be required reading for all students of anthropology, sociology, gender studies, and politics. Those thirsting for knowledge about race-an inescapable and ever more destabilizing feature of our globalizing world -should dip into this Jolly Heretic of a book. Whether laughing out loud or marveling at new facts about human biodiversity, Making Sense of Race is a riveting read."

Author of On Genetic Interests: Family, Ethnicity, and Humanity in an Age of Mass Migration

"Edward Dutton is one of the liveliest and most engaging of this new generation of academic dissidents. . . . He is] what Bill Nye the Science Guy would be, if that gentleman dared to present the human sciences with uninhibited objectivity."