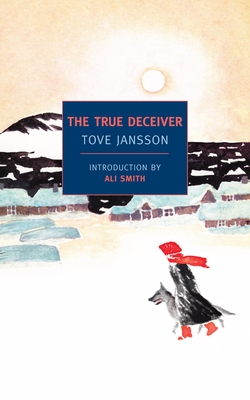 Deception—the lies we tell ourselves and the lies we tell others—is the subject of this, Tove Jansson’s most unnerving and unpredictable novel. Here Jansson takes a darker look at the subjects that animate the best of her work, from her sensitive tale of island life, The Summer Book, to her famous Moomin stories: solitude and community, art and life, love and hate.

Snow has been falling on the village all winter long. It covers windows and piles up in front of doors. The sun rises late and sets early, and even during the day there is little to do but trade tales. This year everybody’s talking about Katri Kling and Anna Aemelin. Katri is a yellow-eyed outcast who lives with her simpleminded brother and a dog she refuses to name. She has no use for the white lies that smooth social intercourse, and she can see straight to the core of any problem. Anna, an elderly children’s book illustrator, appears to be Katri’s opposite: a respected member of the village, if an aloof one. Anna lives in a large empty house, venturing out in the spring to paint exquisitely detailed forest scenes. But Anna has something Katri wants, and to get it Katri will take control of Anna’s life and livelihood. By the time spring arrives, the two women are caught in a conflict of ideals that threatens to strip them of their most cherished illusions.

Tove Jansson (1914–2001) was born in Helsinki into Finland’s Swedish-speaking minority. Her father was a sculptor and her mother a graphic designer and illustrator. Winters were spent in the family’s art-filled studio and summers in a fisherman’s cottage on the shore of the Gulf of Finland, a setting that would later figure in Jansson’s writing for adults and children. Jansson loved books as a child and set out from an early age to be an artist; her first illustration was published when she was fifteen years old; four years later a picture book appeared under a pseudonym. After attending art schools in both Stockholm and Paris, she returned to Helsinki, where in the 1940s and ’50s she won acclaim for her paintings and murals. From 1929 until 1953 Jansson drew humorous illustrations and political cartoons for the left-leaning anti-Fascist Finnish-Swedish magazine Garm, and it was there that what was to become Jansson’s most famous creation, Moomintroll, a hippopotamus-like character with a dreamy disposition, made his first appearance. Jansson went on to write about the adventures of Moomintroll, the Moomin family, and their curious friends in a long-running comic strip and in a series of books for children that have been translated throughout the world, inspiring films, several television series, an opera, and theme parks in Finland and Japan. Jansson also wrote novels and short stories for adults, of which The Sculptor’s Daughter, The Summer Book, Sun City, Fair Play, and The True Deceiver have been translated into English. In 1994 she was awarded the Prize of the Swedish Academy. Jansson and her companion, the artist Tuulikki Pietilä, continued to live part-time in a cottage on the remote outer edge of the Finnish archipelago until 1991.

“[The True Deceiver is] one of [Jansson's] greatest novels . . . Riveting, original, and strange.” —Sheila Heti, The New Yorker

“A perfectly constructed book about truth and deceit, and deceiving through truth, it’s obvious why this book won the Best Translated Book Award in 2011. And it’s the perfect accompaniment to reading all of Jansson’s Moomin books.” —Publishers Weekly

"Her description is unhurried, accurate and vivid, an artist's vision . . . The sentences are beautiful in structure, movement and cadence. They have inevitable rightness. And this is a translation! Thomas Teal deserves to have his name on the title page with Jansson's: he has worked the true translator's miracle. . . . the most beautiful and satisfying novel I have read this year." —Ursula K. Le Guin, The Guardian

"[A] dark companion to her glowing The Summer Book. Here the setting is winter, and the almost Highsmithian subject concerns a woman who inveigles herself in the life of a famous, and rich, writer. Jansson's writing is, as always, understated yet acute and thrilling." —Los Angeles Times

"Jansson crafts an unsentimental—often mischievous—novel of ideas that asks whether it is better to be kind than to be truthful, especially for an artist. Ali Smith’s excellent introduction expresses shock and delight that there is still fiction by Jansson untranslated into English. After reading this gem, who could disagree?" —Financial Times

"I loved this book . . . understated yet exciting, and with a tension that keeps you reading. I felt transported to that remote region of Sweden and when I finished it I read it all over again. The characters still haunt me." —Ruth Rendell

"Tove Jansson is a great, engaging talent—a serious, complex, occasionally macabre novelist as well as a major and versatile painter who has worked for fifty years in the artistic mainstream. In Scandinavia, she is regarded as a treasure. As we come better to understand her achievement, we honor her likewise." —The HornBook

"[A]s this narrative ticks forward, it becomes evident that a book of almost inscrutable intricacy is being built from so many simple, separate components gradually enmeshing." —Theodore McDermott, The Believer