Cascadia's Fault: The Coming Earthquake and Tsunami That Could Devastate North America (Paperback) 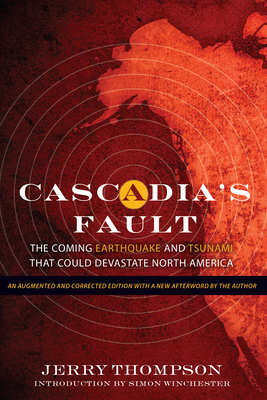 By Jerry Thompson, Simon Winchester (Introduction by)
Email info@chaucersbooks.com or call (805) 682-6787 for price
May Be Available From the Publisher

Includes a new Afterword by the author on the 2011 Japan Earthquake, the lessons learned, and the parallel threat to North America. A new study just published by the US Geological Survey confirms and underlines many of the issued raised in the first edition of Cascadia's Fault. There is a crack in the earth's crust that runs roughly 31 miles offshore, approximately 683 miles from Northern California up through Vancouver Island off the coast of British Columbia. The Cascadia Subduction Zone has generated massive earthquakes over and over again throughout geologic time--at least thirty-six major events in the last 10,000 years. This fault generates a monster earthquake about every 500 years. And the monster is due to return at any time. It could happen 200 years from now, or it could be tonight. The Cascadia Subduction Zone is virtually identical to the offshore fault that wrecked Sumatra in 2004. It will generate the same earthquake we saw in Sumatra, at magnitude nine or higher, sending crippling shockwaves across a far wider area than any California quake. Slamming into Sacramento, Portland, Seattle, Victoria, and Vancouver, it will send tidal waves to the shores of Australia, New Zealand, and Japan, damaging the.

Jerry Thompson is an award-winning documentary filmmaker living outside of Vancouver. For twenty years, he worked as a as a network news correspondent and a documentary film producer for Canadian Broadcasting Corporation. He has written articles for Equinox and Vancouver magazine, and has produced and narrated a half-dozen highly regarded television documentary specials on Cascadia's fault that received wide critical praise.

"Reporter Jerry Thompson puts the history of subduction earthquakes and the resultant tsunamis into clear perspective. In Cascadia’s Fault: The Coming Earthquake and Tsunami That Could Devastate North America, Thompson has written a very readable tale of how plate tectonics and earthquake science works, and what we need to know if we insist on being Left Coasters." Sacramento News & Review

Writer and director Jerry Thompson describes the brilliant scientific research conducted by Canadian and U.S. geologists and geophysicists that led to the important discovery that the Pacific Northwest experiences some of the largest earthquakes on Earthgiant subduction zone earthquakes. The Cascadian Subduction Zone is armed and dangerousan earthquake comparable to, or even larger than, the great earthquake in Japan in March 2011, is inevitable. This inevitability demands that we better prepare ourselves and our cities for the Big One.’ Cascadia’s Fault is a captivating read that gives readers a sense of the excitement of scientific discovery and the importance of science to society.” John Clague, Directore, Centre for Natural Hazard Research, Simon Fraser University

If you don’t know much about the risk posed by Cascadia, then you are not alone; indeed, for a long time even geologists were in the dark. The story of how they slowly uncovered the danger signs is the focus of journalist Jerry Thompson’s excellent new book, Cascadia’s Fault, a creditable attempt to raise awareness beyond geoscientists and emergency planners who have, as he puts it in his introduction, been having a devil of a time getting anyone to pay attention.’” Highly Allochthonous

"Jerry Thompson, a longtime journalist, doesn't say much if anything about politics in his new book. But the political implications of his book, for Canada and the United States, are inescapable." The Tyee

"Thompson, a journalist and documentary film producer, presents this frightening look at the Cascadia subduction zone and the risk it poses to major American West coast cities through powerful earthquakes and devastating tsunami waves. Drawing from current seismology research and the effects of recent massive quakes in Chile, Sumatra and Japan, the work outlines the risks to this seemingly quiet section of the "Ring of Fire" and advocates for better disaster preparedness as the only way to survive the inevitable disaster to come." Booknews