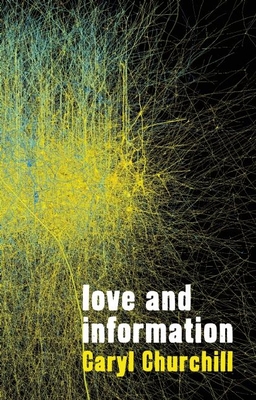 Caryl Churchill is a dramatist who must surely be amongst the best half-dozen now writing... a playwright of genuine audacity and assurance, able to use her considerable wit and intelligence in ways at once unusual, resonant and dramatically riveting. -Benedict Nightingale A] thought-churning, deeply poignant new play... Leave it to Ms. Churchill to come up with a work that so ingeniously and exhaustively mirrors our age of the splintered attention span... This British playwright has proved herself without peer in creating expressly topical works in which form and function are one.... Sharp-minded and] tender-hearted. -Ben Brantley, New York Times Someone sneezes. Someone can't get a signal. Someone shares a secret. Someone won't answer the door. Someone put an elephant on the stairs. Someone's not ready to talk. Someone is her brother's mother. Someone hates irrational numbers. Someone told the police. Someone got a message from the traffic light. Someone's never felt like this before. In the fast moving kaleidoscope of Love and Information, more than a hundred characters try to make sense of what they know. Love and Information premiered at London's Royal Court Theatre in fall 2012, followed by an acclaimed U.S. premiere at New York Theatre Workshop in early 2014. Caryl Churchill has written for the stage, television and radio. A renowned and prolific playwright, her plays include Cloud Nine, Top Girls, Far Away, Drunk Enough to Say I Love You?, Bliss, Love and Information, Mad Forest and A Number. In 2002, she received the Obie Lifetime Achievement Award and 2010, she was inducted into the American Theater Hall of Fame.

Caryl Churchill is arguably the most respected female dramatist in the English-speaking world. She is the author of some twenty plays including Light Shining in Buckinghamshire, Cloud Nine, Top Girls, Serious Money, The Skriker, Blue Heart, Far Away, A Number, Drunk Enough to Say I Love You and Seven Jewish Children - seen and admired all over the world. Most are published by TCG.