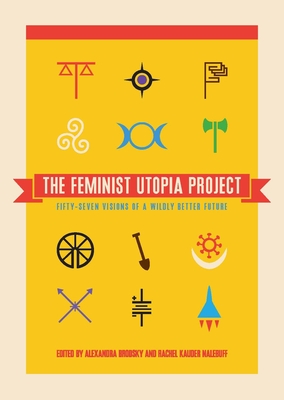 In this groundbreaking collection, more than fifty cutting-edge feminist writers--including Melissa Harris-Perry, Janet Mock, Sheila Heti, and Mia McKenzie--invite us to imagine a world of freedom and equality in which:

An abortion provider reinvents birth control . . .
The economy values domestic work . . .
A teenage rock band dreams up a new way to make music . . .
The Constitution is re-written with women's rights at the fore . . .
The standard for good sex is raised with a woman's pleasure in mind . . .

The Feminist Utopia Project challenges the status quo that accepts inequality and violence as a given, "offering playful, earnest, challenging, and hopeful versions of our collective future in the form of creative nonfiction, fiction, visual art, poetry, and more" (Library Journal).

Alexandra Brodsky is an editor at Feministing.com, student at Yale Law School, and co-founder of Know Your IX, a national student campaign against campus gender-based violence. Alexandra regularly writes about feminist law in publications including The New York Times, The Washington Post, and The Nation and has spoken about strengthening civil rights responses to gender-based violence on national television and radio programs and before the Senate. Rachel Kauder Nalebuff is a playwright living in Los Angeles. She is the creator of The New York Times bestseller My Little Red Book, an anthology of women's first period stories. She has given talks about periods to schools, conferences, and Girl Scout troops around the country. Her work reducing the taboos around menstruation has been featured in The New York Times, The New Yorker, The Huffington Post, NPR, and Jezebel. You can learn more about her at itsrachelkaudernalebuff.com.