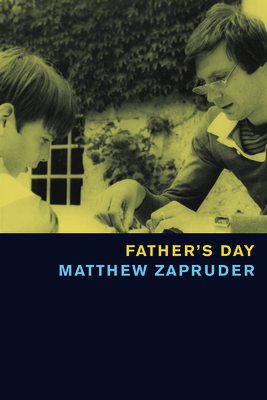 As seen in the The New York Times Book Review

"In characteristically short lines and pithy, slippery language like predictive text from a lucid dream, Zapruder's fifth collection grapples with fatherhood as well as larger questions of influence and inheritance and obligation." --The New York Times

" Zapruder] presents powerfully nuanced and vivid verse about the limitations of poetry to enact meaningful change in a world spiraling into callousness; yet despite poetry's supposed constraints, Zapruder's verse offers solace and an invaluable blueprint for empathy." ―Publishers Weekly, starred review

"Zapruder's new book, Father's Day, is firmly situated in its (and our) political moment, and is anchored by a compelling gravity and urgency." ―The Washington Post

The poems in Matthew Zapruder's fifth collection ask, how can one be a good father, partner, and citizen in the early twenty-first century? Zapruder deftly improvises upon language and lyricism as he passionately engages with these questions during turbulent, uncertain times. Whether interrogating the personalities of the Supreme Court, watching a child grow off into a distance, or tweaking poetry critics and hipsters alike, Zapruder maintains a deeply generous sense of humor alongside a rich vein of love and moral urgency. The poems in Father's Day harbor a radical belief in the power of wonder and awe to sustain the human project while guiding it forward.

Matthew Zapruder is the author of four collections of poetry, most recently Come On All You Ghosts (Copper Canyon), a New York Times Notable Book of the Year, and Sun Bear (Copper Canyon), as well as Why Poetry, a book of prose, from Ecco Press/Harper Collins (2017). He has received a Guggenheim Fellowship, a William Carlos Williams Award, and a May Sarton Award from the Academy of American Arts and Sciences. His poetry has been adapted and performed at Carnegie Hall by Composer Gabriel Kahane and Brooklyn Rider, and was the libretto for Vespers for a New Dark Age, a piece by composer Missy Mazzoli. In 2000, he co-founded Verse Press, and is now editor at large at Wave Books. From 2016-7 he held the annually rotating position of Editor of the Poetry Column for the New York Times Magazine. He lives in the San Francisco Bay Area, where he is an Associate Professor at Saint Mary's College of California.