Act Like You Got Some Sense: And Other Things My Daughters Taught Me (Paperback) 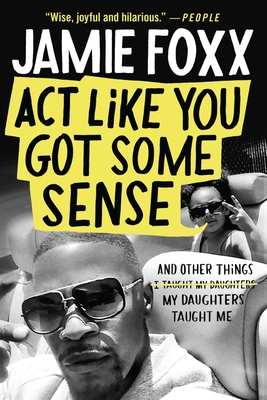 From Academy Award-winning multi-talent Jamie Foxx, a hilariously candid look at the joys and pitfalls of being the father of two daughters.

Jamie Foxx is not only an actor, comedian, and musician, he's also starring in his most humbling and long-running role yet as father to two independent girls: Corinne and Anelise. While his daughters have very different views on the world, there is one thing they can agree on: Dad gets on their motherf***ing nerves. Though every day with his girls brings hurdles and hilarity, he's learned a lot along the way.

In Act Like You Got Some Sense—a title inspired by his beloved and fierce grandmother—Jamie reveals his rocky parenting journey through priceless stories about the tough love and old-school values he learned growing up in the small town of Terrell, Texas; his early days trying to make it in Hollywood; and life after achieving stardom. You would think being an A-lister would ease his dad-duty struggles, but if anything, it has only made things more complicated. It seems that a teenage girl who just wants to blend in with her friends will not be excited to see her dad's flashy new convertible at the front of the carpool lane.

Hilarious, poignant, and always brutally honest, Act Like You Got Some Sense is Jamie Foxx like we’ve never seen him before, dealing with problems he never imagined he’d have.

"In this debut full of genuine reflection and heartfelt humor, actor and comedian Foxx riffs on parenting (“You ain’t ready for it”) and the life experiences that gradually helped shape him as a father. . . Foxx writes in a jovial manner, with jokes flying constantly. . . Yet where this book truly excels is in its honesty, offering an intimate look past Jamie Foxx the famous actor to reveal a relatable figure."—Publishers Weekly, starred review

"In cheerfully meandering stories, Foxx displays his comedic timing and pacing and is always entertaining, blending the folksy yet hard-edged wisdom of his adoptive grandmother with hard-won, more worldly "New Dad" sensibilities. . . Foxx's parenting-advice book is the equivalent of a vitamin-packed smoothie: sweet, fun, and easy to enjoy, full of slyly concealed nourishment and goodness."—Booklist

"Act Like You Got Some Sense—its title gleaned from a phrase his late grandmother Estelle told him often—hilariously and poignantly details [Foxx's] upbringing as well as his experiences raising daughters Corinne, 27, and Anelise, 13, while orbiting Hollywood as one of its biggest and hardest-working stars."—Men's Health

"[R]eally funny. . . If you weren’t already a fan [of Foxx], you’ll be one after reading this heartfelt and honest book."—CNN

"Foxx’s tales of fatherhood are heartwarming and humorous, and he offers sensible tips that serve as strong reminders of how to treat today’s youth with respect and patience. . . Foxx's many fans will embrace the opportunity to learn more about the enigmatic actor, and parents will appreciate his commonsense, relatable approach to raising independent humans." —Library Journal