Clanlands: Whisky, Warfare, and a Scottish Adventure Like No Other (Paperback) 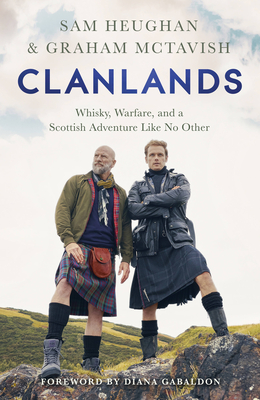 Unlikely friends Sam and Graham begin their journey in the heart of Scotland at Glencoe and travel from there all the way to Inverness and Culloden battlefield, where along the way they experience adventure and a cast of highland characters. In this story of friendship, finding themselves, and whisky, they discover the complexity, rich history and culture of their native country.

Sam Heughan is an award-winning actor and philanthropist, best known for his starring role as Jamie Fraser in the hit TV show Outlander. From his early days at the Royal Court Theatre to his most recent role in the hit action film Bloodshot, Sam has enjoyed a career in theatre, television and film spanning almost two decades. With his growing success and fame, Sam has also lent his voice and platform to raise funds and awareness for many notable charities, including Marie Curie UK and Blood Cancer UK. In recent years he has raised over $5 million for blood cancer research, hospice care and testicular cancer awareness education. Due to his outstanding contribution to charitable endeavors and artistic success he was bestowed by the University of Glasgow and the University of Stirling with an honorary doctorate in 2019.

Graham McTavish has been acting for over 35 years in theatre, film and television. On film and TV he is best known for his roles as Dougal MacKenzie in Outlander, the fierce Dwarf Dwalin in The Hobbit trilogy, and AMC's cult show Preacher as the Saint of Killers. He has performed in theatre all over the world from the Royal Court Theatre in London to the Metropolitan Museum of Art in New York. He is delighted that the dream of his 12-year-old self to be a published author has finally come true!