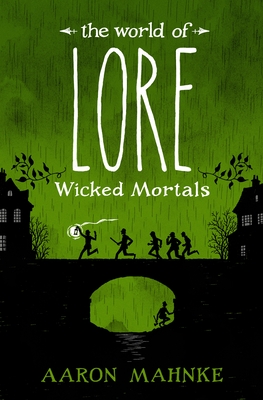 This is book number 2 in the The World of Lore series.

A chilling, lavishly illustrated who’s who of the most despicable people ever to walk the earth, featuring stories from the Lore podcast—now a streaming television series—including “Black Stockings,” “Half-Hanged,” and “The Castle,” as well as rare material.

Some monsters are figments of our imagination. Others are as real as flesh and blood: humans who may look like us, who may walk among us, often unnoticed, occasionally even admired—but whose evil deeds and secret lives, once revealed, mark them as something utterly wicked.

In this illustrated volume from the host of the hit podcast Lore, you’ll find tales of infamous characters whose veins ran with ice water and whose crimes remind us that truth can be more terrifying than fiction. Aaron Mahnke introduces us to William Brodie, a renowned Scottish cabinetmaker who used his professional expertise to prey on the citizens of Edinburgh and whose rampant criminality behind a veneer of social respectability inspired Robert Louis Stevenson’s classic novella Strange Case of Dr. Jekyll and Mr. Hyde. Then there’s H. H. Holmes, a relentless and elusive con artist who became best known as the terror of Chicago’s 1893 World’s Fair when unwitting guests were welcomed into his “hotel” of horrors . . . never to be seen again. And no rogues’ gallery could leave out Bela Kiss, the Hungarian tinsmith with a taste for the occult and a collection of gasoline drums with women’s bodies inside.

Brimming with accounts of history’s most heinous real-life fiends, this riveting best-of-the-worst roundup will haunt your thoughts, chill your bones, and leave you wondering if there are mortal monsters lurking even closer than you think.

Aaron Mahnke is the writer, host, and producer of Lore, as well as the author of a number of supernatural thrillers. His deep love of the mysterious and frightening began with Unsolved Mysteries and The X-Files—and it’s a love that continues to this day. Basically, he’s a nerd for anything inexplicable or supernatural. Mahnke lives with his family in the historic North Shore area of Boston, the very heart of Lovecraft Country and the Salem witch trials.

Praise for the Lore podcast

“Truth can often be much scarier than fiction—something [Aaron] Mahnke proves as he dives deep into the world of folklore and the darker side of history in a quest to root out the fragment of truth at the bottom of our fears.”—Entertainment Weekly

“Unlike so much horror that needs over-the-top viscera to scare you, this podcast leans on history—folklore, myth, the stuff people once thought was true—to tell its tales.”—The Atlantic

“Narrated by Mahnke in a style that evokes spooky campfire stories, Lore is a history lesson like no other.”—Esquire