A Strange Manuscript Found in a Copper Cylinder (Paperback) 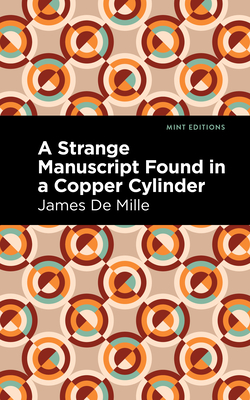 A Strange Manuscript Found in a Copper Cylinder (1888) is a novel by James De Mille. Originally serialized in Harper's Weekly, the novel was published posthumously and, at first, anonymously. Although De Mille's work predated such popular Lost World novels as H. Rider Haggard's She (1887) and King Solomon's Mines (1885), it was published nearly a decade after his death, leading critics to assume he had merely written a derivative work of fiction. Recent scholarship, however, has sought to emphasize De Mille's talents as a writer and importance in the historical development of literary science fiction. "The wind had failed, a deep calm had succeeded, and everywhere, as far as the eye could reach, the water was smooth and glassy. The yacht rose and fell at the impulse of the long ocean undulations, and the creaking of the spars sounded out a lazy accompaniment to the motion of the vessel." Sailing in their yacht, a crew spots a copper cylinder afloat on the sunbeaten sea. Hauling it aboard, they open it to reveal a manuscript sealed from the elements containing the story of Adam More. Shipwrecked while returning to Britain from Tasmania, the sailor found himself stranded on a strange desert island near Antarctica. Soon, he stumbles upon a lost world of prehistoric plants and animals, a land of indescribable beauty and wonder. In the harsh volcanic landscape, he discovers a race of humans whose values are entirely foreign to his Western frame of mind. With a beautifully designed cover and professionally typeset manuscript, this edition of James De Mille's A Strange Manuscript Found in a Copper Cylinder is a classic work of American science fiction reimagined for modern readers.