Pigs of Paradise: The True Story of the World-Famous Swimming Pigs (Hardcover) 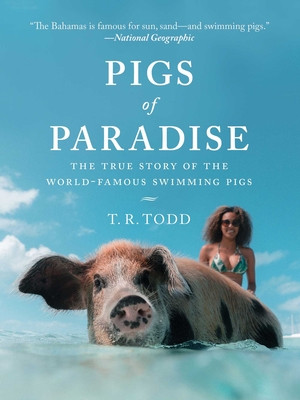 In the middle of paradise, with billionaires and celebrities for neighbors, is an island populated only by swimming pigs. For decades, this archipelago of 365 islands would remain largely unknown to the world. It would not be a ruthless pirate, pioneering loyalists, a notorious drug kingpin, or the infamous Fyre Festival that would unveil Exuma to the world, but rather the most unlikely of creatures.

Appearing in magazines, videos, newspapers, commercials, TV shows, and countless selfies, the Swimming Pigs of Exuma, in the Bahamas, have become a bucket-list sensation and have been named one of the marvels of the universe.

But how did they reach this celebrity status? What made them so famous? Why, in February 2017, did so many of them die? And how did recent events such as the Fyre Festival and Hurricane Dorian affect the many pig colonies spread throughout the Bahamas?

Pigs of Paradise is an unlikely story of humble beginnings and a swift rise to stardom. With interviews from historians, world-renowned ecologists, famous pig owners, and boat captains, it thoughtfully considers what this phenomenon says about not only these animals but also about the humans who admire and care for them.

T.R. Todd is a journalist, biographer, and novelist with experience in Canada, the Bahamas, and the United Arab Emirates. His work has appeared in newspapers across North America, including the New York Times, Huffington Post, Globe and Mail, and Toronto Star. He currently lives in Ottawa, Canada, where he is freelancing and completing his second novel.

Praise for the Swimming Pigs of Exuma

“If you make it down to The Exumas, a trip to Pig Island is a must. It had been on my bucket list for a very long time, and it was even better than I could have imagined.” —The Londoner

“As your boat approaches Big Major Cay, you’re awoken from this daydream by some rather boorish inhabitants: loud, snorting pigs paddling out to greet you like a jolly bunch of golden retrievers rushing to the door when their owner finally gets home from a long day of work.” —Travel & Leisure

"The Bahamas, an alluring chain of islands surrounded by luminous turquoise waters, is an ideal place to bask in the bright Caribbean sun or snorkel with rainbows of fish. Turns out it’s also the best place in the world to hit the sands with some rather unusual local beach bums: swimming pigs." —Lonely Planet's Marvels of the Modern World

"People want this semi-wild, unpredictable pig experience and can become unbelievably and uproariously happy, despite the fact that they probably ate bacon and eggs for breakfast." —New York Times Magazine

"The pigs are now celebrities, from fans posting on Instagram, visits from celebrities ranging from Donald Trump Jr. to Bella Hadid, and an appearance on ABC's The Bachelor." —CNBC

"They don't fly, but swimming pigs are quite famous. From posting with celebs like Amy Schumer, to appearing on the bachelor and the Angry Birds trailer, and they are even featured in a documentary. " —NBC's Today Show

"Everyone from Amy Schumer to Jennifer Lawrence and Johnny Depp have visited the remote island in the Exumas, where the now Insta-famous pigs spend their days swimming in the clear, warm Caribbean sea and waiting for their celebrity fans to visit. Their fame even means they've graduated from social media to music videos—appearing in Pitbull's video for 'Timber'—so basically: we give it a year until these fame-hungry pigs are on Celebrity Big Brother." —Heat World