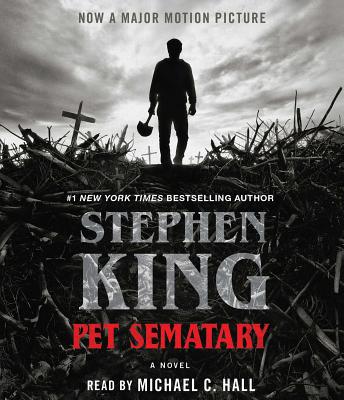 By Stephen King, Michael C. Hall (Read by)
$24.99
This title is likely Out of Print or otherwise unavailable

When Dr. Louis Creed takes a new job and moves his family to the idyllic rural town of Ludlow, Maine, this new beginning seems too good to be true. Despite Ludlow’s tranquility, an undercurrent of danger exists here. Those trucks on the road outside the Creed’s beautiful old home travel by just a little too quickly, for one thing…as is evidenced by the makeshift graveyard in the nearby woods where generations of children have buried their beloved pets. Then there are the warnings to Louis both real and from the depths of his nightmares that he should not venture beyond the borders of this little graveyard where another burial ground lures with seductive promises and ungodly temptations. A blood-chilling truth is hidden there—one more terrifying than death itself, and hideously more powerful. As Louis is about to discover for himself sometimes, dead is better…

Stephen King is the author of more than sixty books, all of them worldwide bestsellers. His recent work includes Fairy Tale, Billy Summers, If It Bleeds, The Institute, Elevation, The Outsider, Sleeping Beauties (cowritten with his son Owen King), and the Bill Hodges trilogy: End of Watch, Finders Keepers, and Mr. Mercedes (an Edgar Award winner for Best Novel and a television series streaming on Peacock). His novel 11/22/63 was named a top ten book of 2011 by The New York Times Book Review and won the Los Angeles Times Book Prize for Mystery/Thriller. His epic works The Dark Tower, It, Pet Sematary, Doctor Sleep, and Firestarter are the basis for major motion pictures, with It now the highest-grossing horror film of all time. He is the recipient of the 2020 Audio Publishers Association Lifetime Achievement Award, the 2018 PEN America Literary Service Award, the 2014 National Medal of Arts, and the 2003 National Book Foundation Medal for Distinguished Contribution to American Letters. He lives in Bangor, Maine, with his wife, novelist Tabitha King.

Michael C. Hall starred on Six Feet Under and Dexter and appears in the second season of The Crown. He also stars in the mini-series “Safe” for Netflix/Canal Plus. His film credits include Christine, Cold in July, and Kill Your Darlings. On stage, he starred in Lazarus by David Bowie & Enda Walsh, Hedwig and the Angry Inch, and The Realistic Joneses.