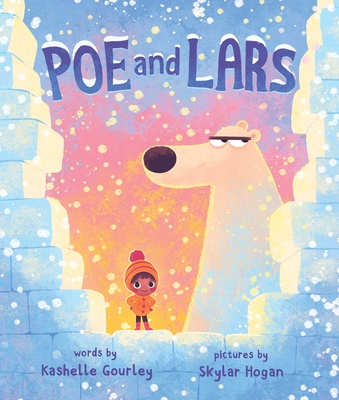 "Like a sunset streaked across fresh snow, the colors of this story are as cozy as its message of taking care of others--and the planet." -Foreword Reviews, STARRED REVIEW

"The author expertly balances humor, suspense, and whimsy, fleshing out complex characters in just a few pages. The illustrations employ a gorgeous color palette that perfectly reflects the pastel hues of the Arctic, backgrounding the slapstick." --Kirkus Reviews

Lonely Poe and hangry Lars strike a deal in this humorous picture book about an unlikely friendship!

This is Poe.
She lives alone in the Arctic where it's nice and cold. . . .

Poe is a resourceful and creative girl living in the snowy Arctic. Although she enjoys her life, Poe longs for company. But everything changes one day when Lars, a grumpy and hungry polar bear who is quite the poor hunter, crashes into her home, destroying it. Poe offers to bring him food and, in exchange, Lars must repair her home.

Will Lars deliver on his end of the bargain, or does he see something else on the menu? Kids will love this hilarious and brilliantly illustrated tale about an unconventional friendship!

Kashelle Gourley distinctly remembers discovering the magic of books as a little girl in a Northern California library. It opened up another level of imagination, joy, and wonder that she hopes to share with others through her own writing. After moving from coast to coast and overseas to Paris, you can now find her adventuring with her husband and three children in the great Midwest.

Skylar Hogan is an illustrator and storyteller who also works on animation projects and card illustration, including a popular holiday card for Papyrus/Target. He lives in Nebraska. Find out more about him at skylarhogan.com.

Like a sunset streaked across fresh snow, the colors of this story are as cozy as its message of taking care of others-and the planet. Decked in pink and yellow, Poe is a bright spot against the harshness of the Arctic, where she lives all alone. When Lars, a hungry polar bear, destroys her home, the two strike a deal: Poe will feed Lars if Lars rebuilds her home. A near miss with thin ice cements a friendship that can withstand even Arctic winds.
— Foreword Reviews, STARRED REVIEW

Poe is a little girl who lives in the frozen Arctic, all by herself.
Although she loves her home and can entertain herself with her big imagination, she still gets lonely. One day, the roof of her home-an A-frame made of ice blocks-collapses in on itself. The culprit is a polar bear named Lars who suffers from constant hunger. Lars loves to eat, but, unfortunately, he is a terrible hunter. Thinking that she's easy prey, Lars tries to eat Poe. Feisty Poe escapes Lars' jaws and makes a deal. She says that she'll find Lars food if he repairs her house. Lars-who at this point is starving-quickly agrees. Although Lars is not great at repairing roofs, it turns out that Poe is a talented angler. But when Poe is in danger, Lars must decide what is more important to him: a net full of juicy fish or Poe's potentially life-changing friendship. The author expertly balances humor, suspense, and whimsy, fleshing out complex characters in just a few pages. The illustrations employ a gorgeous color palette that perfectly reflects the pastel hues of the Arctic, backgrounding the slapstick. Lars is comically unibrowed; Poe has brown skin and wears a yellow knit cap with red pompom. The author's note mentions climate change, which plays a clear if minor role in the story, and Indigenous people, which are absent.
A lighthearted friendship tale.
— Kirkus Reviews

Poe is a small, brown-skinned girl in a parka, living in an arctic setting where she occasionally yells at the glaciers to stop melting. She is eaten up one day by a "hangry" polar bear named Lars, but from the inside she pries his jaws open and makes a deal-if he will help rebuild her ruined home, she'll feed him. True to her word, she quickly stockpiles fish, and although Lars briefly considers taking advantage of her generosity when she is pulled into the icy water, he remembers how lonely, and hungry, life was before Poe, and he saves her. Watercolor-like scenes of the cozy home they build together follow, along with a rainbow array of fish, scenes of Lars and Poe drying off by the fire, and a conversation about the climate's effects on their surroundings. Back matter is the real source of information about the climate, tipped in for those just learning about global warming. With cheerful illustrations, ­Hogan's tone matches the lighthearted banter of the storytelling, making this a sure hit among preschoolers.
— School Library Journal