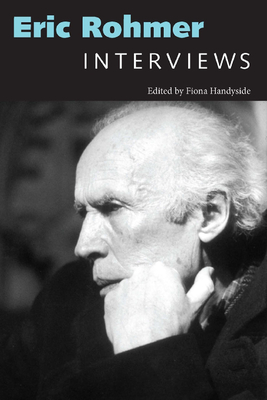 By Fiona Handyside (Editor)
$25.00
On Our Shelves Now - Please call to confirm stock for hot titles

The 1969 film Ma Nuit chez Maud (My Night at Maud's) catapulted its shy academic film director, Eric Rohmer, born Jean-Marie Maurice Scherer (1920-2010), into the limelight and sold over a million tickets in France, earning a nomination for an Academy Award. Ma Nuit chez Maud remains his most famous film, the highlight of an impressive range of work examining the sexual, romantic, and artistic mores of contemporary France, the temptations of desire, the small joys of everyday life, and sometimes, the vicissitudes of history and politics. Yet Rohmer, who became one of the most significant forces in French New Wave film, was almost fifty years old when Maud was released and had already enjoyed a career as the editor of Cahiers du Cin ma. The interviews in this book offer a range of insights into the theoretical, critical, and practical circumstances of Rohmer's remarkably coherent body of films. They also allow Rohmer to act as his own critic, providing an array of readings concerning his interest in setting, season, color, and narrative. Alongside the application of a theoretical rigor to his own films, Rohmer's interviews also discuss directors as varied as Jean-Luc Godard, Marcel Carn , Jean Renoir, and Alfred Hitchcock, and the relations of film to painting, architecture, and music. This book reproduces little-known interviews alongside detailed discussions from Cahiers and Positif, many produced in English here for the first time. Fiona Handyside, Exeter, United Kingdom, is lecturer in European film studies at University of Exeter. Her work has been published in numerous journals including Studies in French Cinema, Film/ Literature Quarterly, and French Cultural Studies.