The Disaster Artist: My Life Inside the Room, the Greatest Bad Movie Ever Made (MP3 CD) 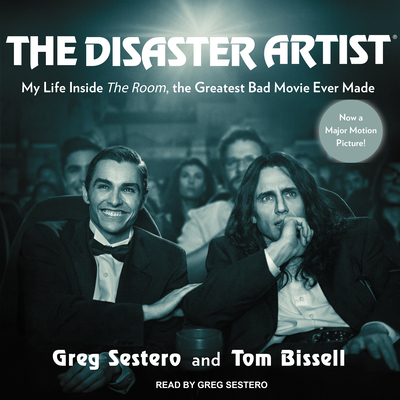 By Greg Sestero, Tom Bissell, Greg Sestero (Narrated by)
Likely Out of Print, but possibly available from the Publisher. Call for more info

Nineteen-year-old Greg Sestero met Tommy Wiseau at an acting school in San Francisco. Wiseau's scenes were rivetingly wrong, yet Sestero, hypnotized by such uninhibited acting, thought, I have to do a scene with this guy. That impulse changed both of their lives. Wiseau seemed never to have read the rule book on interpersonal relationships (or the instructions on a bottle of black hair dye), yet he generously offered to put the aspiring actor up in his LA apartment. Sestero's nascent acting career first sizzled, then fizzled, resulting in Wiseau's last-second offer to Sestero of co-starring with him in The Room, a movie Wiseau wrote and planned to finance, produce, and direct-in the parking lot of a Hollywood equipment-rental shop. Wiseau spent $6 million of his own money on his film, but despite the efforts of the disbelieving (and frequently fired) crew and embarrassed (and frequently fired) actors, the movie made no sense. Nevertheless, Wiseau rented a Hollywood billboard featuring his alarming headshot and staged a red carpet premiere. The Room made $1,800 at the box office and closed after two weeks. One reviewer said that watching The Room was like getting stabbed in the head. The Disaster Artist is Greg Sestero's laugh-out-loud funny account of how Tommy Wiseau defied every law of artistry, business, and friendship to make the Citizen Kane of bad movies (Entertainment Weekly), which is now an international phenomenon, with Wiseau himself beloved as an oddball celebrity. Written with award-winning journalist Tom Bissell, The Disaster Artist is an inspiring tour de force that reads like a page-turning novel, an open-hearted portrait of an enigmatic man who will improbably capture your heart.

Tom Bissell is the author of several books, including "God Lives in St. Petersburg," "The Father of All Things," and "Extra Lives." He writes for multiple publications, including, "Harper's Magazine," "Slate," and "The New Republic." He also contributes to Grantland and "The New Yorker." Tom lives in Los Angeles, California. Greg Sestero is an actor, producer, and writer. At the age of 17, he began his career in entertainment by modeling in Milan for such designers as Valentino and Armani. Upon returning to California, he went on to pursue acting and appeared in several films and television shows before co-starring in the international cult phenomenon "The Room." Greg now resides in Los Angeles.