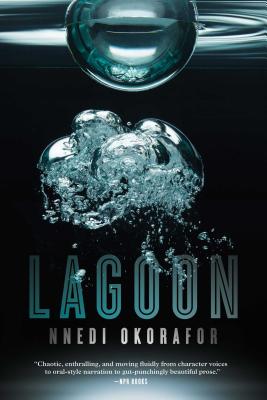 It’s up to a famous rapper, a biologist, and a rogue soldier to handle humanity’s first contact with an alien ambassador—and prevent mass extinction—in this novel that blends magical realism with high-stakes action.

After word gets out on the Internet that aliens have landed in the waters outside of the world’s fifth most populous city, chaos ensues. Soon the military, religious leaders, thieves, and crackpots are trying to control the message on YouTube and on the streets. Meanwhile, the earth’s political superpowers are considering a preemptive nuclear launch to eradicate the intruders. All that stands between seventeen million anarchic residents and death is an alien ambassador, a biologist, a rapper, a soldier, and a myth that may be the size of a giant spider, or a god revealed.

Nnedi Okorafor is an award-winning novelist of African-based science fiction, fantasy, and magical realism. Born in the US to Nigerian immigrant parents, Okorafor is known for weaving African cultures into creative settings and memorable characters. Her book, Who Fears Death has been optioned by HBO, with Game of Thrones' George R.R. Martin as executive producer. Okorafor is a full-time professor at the University at Buffalo, New York (SUNY).

"Lagoon is a wonderfully contemporary look at how people react when confronted with the unknown on a massive scale, with all the personal character changes and challenges I could hope for. I loved reading Lagoon and it is definitely going on my reread circuit."
— Fantasy Faction

"Lagoon mixes a traditional trope of SF – first contact with visitors from the stars – with African magical realism to create a lyrical, poetic mash-up examining social deprivation, religious excess and the power of story on our lives."
— Eric Brown

"Lagoon is a fascinating entry into the science fiction of place."
— Michael Ann Dobbs