Paul and the Good Life: Transformation and Citizenship in the Commonwealth of God (Paperback) 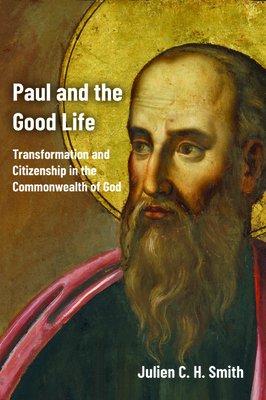 Salvation and human flourishing--a life marked by fulfillment and well-being--have often been divorced in the thinking and practice of the church. For the apostle Paul, however, the two were inseparable in the vision for the good life. Drawing on the revolutionary teachings and kingdom proclamation of Jesus, Paul and the early church issued a challenge to the ancient world's dominant narratives of flourishing. Paul's conviction of Jesus' universal Lordship emboldened him to imagine not just another world, but this world as it might be when transformed.

With Paul and the Good Life, Julien Smith introduces us afresh to Paul's vision for the life of human flourishing under the reign of Jesus. By placing Paul's letters in conversation with both ancient virtue ethics and kingship discourse, Smith outlines the Apostle's christologically shaped understanding of the good life. Numerous Hellenistic philosophical traditions situated the individual cultivation of virtue within the larger telos of the flourishing polis. Against this backdrop, Paul regards the church as a heavenly commonwealth whose citizens are being transformed into the character of its king, Jesus. Within this vision, salvation entails both deliverance from the deforming power of sin and the re-forming of the person and the church through embodied allegiance to Jesus. Citizenship within this commonwealth calls for a countercultural set of virtues, ones that foster unity amidst diversity and the care of creation.

Smith concludes by enlisting the help of present-day interlocutors to draw out the implications of Paul's argument for our own context. The resulting conversation aims to place Paul in engagement with missional hermeneutics, spiritual disciplines, liturgical formation, and agrarianism. Ultimately, Paul and the Good Life invites us to imagine how citizens of this heavenly commonwealth might live in the in-between time, in which Jesus's reign has been inaugurated but not consummated.