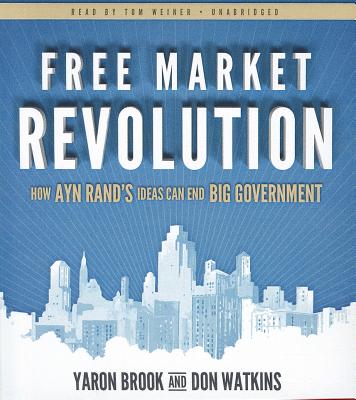 By Yaron Brook, Don Watkins, Tom Weiner (Read by)
$29.95
This title is likely Out of Print or otherwise unavailable

Here is a look at how our current economic crises are caused by too much government--and how Ayn Rand's bold defense of free markets can help us change course. The rise of the Tea Party and the 2010 election results revealed that tens of millions of Americans are alarmed by big government but skeptical that anything can or will be done to stop the growth of the state. In Free Market Revolution, the keepers of Ayn Rand's legacy argue that the answer lies in Rand's pioneering philosophy of capitalism and self-interest--a philosophy that more and more people are turning to for answers. In the past few years, Rand's works have surged to new peaks of popularity, as politicians like Paul Ryan, media figures like John Stossel, and businessmen like John Mackey routinely name her as one of their chief influences. Here, Brook and Watkins explain how her ideas can solve a host of political and economic ills, including the debt crisis, inflation, overregulation, and the growing welfare state. And most importantly, they show how Rand's philosophy can enable defenders of the free market to seize the moral high ground in the fight to limit government. This is a fresh and urgent look at the ideas of one of the most controversial figures in modern history--ideas that may prove the only hope for the future.