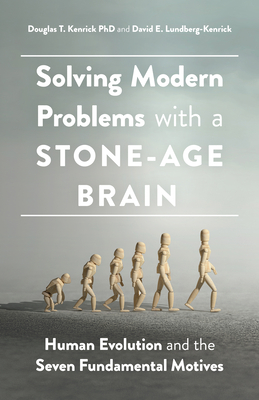 Sharing stories and advice rooted in the science of evolutionary psychology, father and son authors Doug Kenrick and David Lundberg-Kenrick pinpoint the dangers of stone-age problem solving for our lives today, and present a new, systematic way to survive and be happy in the modern world. Over millennia, we humans have evolved a set of motivational systems to help us solve the seven basic problems of existence: surviving, protecting ourselves from dangerous others, forming friendships, winning respect, attracting mates, hanging onto mates, and caring for our families. We seek the same goals in the 21st century. However, the saber-tooth tigers and rival tribes that once threatened us have been replaced by marketers peddling sugar-laden foods, pundits fanning the culture war flames, and payday loan companies scamming those who can least afford it. Through a series of engaging narratives and science-based life tips, this book helps us see past our electronics and lattes and gain helpful insights into achieving the life we want.

Douglas T. Kenrick is author of The Rational Animal and Sex, Murder, and the Meaning of Life. He has published over 200 scientific articles, books, and chapters, the majority applying evolutionary ideas to human behavior and thought processes. His textbook Social Psychology: Goals in Interaction, with Steven Neuberg, Robert Cialdini, and David Lundberg-Kenrick, is now in its 7th edition. He has appeared in numerous documentaries and the Oprah Winfrey Show, and written for The New York Times and Scientific American. His Psychology Today blog, titled "Sex, Murder, and the Meaning of Life," has been visited by 4.6 million readers. David Lundberg-Kenrick is Media Outreach Director for the Arizona State University psychology department, managing a new program called "Psych for Life," which connects psychological research to problems we all face every day. Dave studied film production at New York University and UT Austin, and shot footage for BBC, Discovery Channel, and SBS Australia, as well filming the founding members of the field of evolutionary psychology for HBES. He is coauthor of Social Psychology: Goals in Interaction, 7e, for which he produced videos in which researchers from around the world share their findings in a lively animated format.