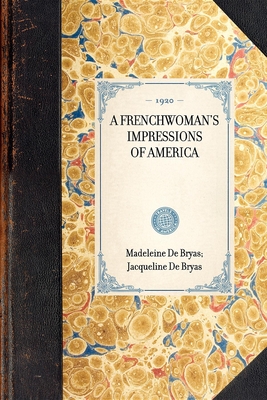 In a trip designed to raise funds for the ""American Committee for Devastated France,"" Comtesse Madeleine de Bryas and her sister Jacqueline arrived in the United States in 1918. Although born, raised, and educated in Paris, the sisters claimed to descend directly from ""two Signers of the Declaration of Independence of America. George Clymer, our mother's great-grandfather, and George Read, both being not only signers but also framers of the Constitution of the United States."" Acting in a post-World War I diplomatic capacity, the sisters traveled the country over a period of six months to give fund-raising speeches. In their published work, they give their impressions of America, comparing American culture and fashion to French, and generally highlight their great appreciation of America, particularly American hospitality and generosity. The sisters' tour took them across America-from New York, to St. Louis, to San Francisco, and the Puget Sound, before their return east to Washington, D.C.